5 Types of Tantrums Your Child May Have 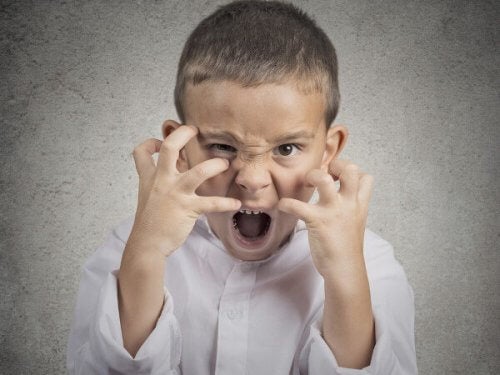 Do you want to know what types of tantrums exist? Here are the five most common ones.

According to experts on the subject, tantrums are defined as the emotional bursts of anger in children from 1 to 5 years old. They appear as sudden, uncontrolled episodes of anger and crying, in most cases with no apparent reason.

Types of tantrums in children

When children cry, kick and scream with great force, throwing themselves to the ground, they usually don’t listen to reason.

Most parents are afraid of these tantrums, so it’s important to be able to differentiate between the types of tantrums and to know how they originate and how to react in each case.

1. Tantrums to attract attention or demand something

This tantrum is most often used by children to try to exercise parental control and dominate them. Usually they do it to ask for more attention, either because they feel jealous of one of their siblings, or just to give them more time.

Experts say that this tantrum sometimes occurs because the child feels isolated. The best attitude to take is to let him calm down in order to observe the reasons why he has acted this way.

It may also be due to the fact that his requirements haven’t been met, or due to simple manipulation.

If the answer is the first option, it’s important that you pay more attention to your child when he speaks to you, and if it’s the second, that you demonstrate that he cannot always have everything that he wants.

During tantrums that are meant to get attention, children cry, kick and throw themselves to the ground, and sometimes they even stop breathing for a few seconds.

The most advisable thing is to not give in to his request, because you’ll be allowing your child to manipulate you in this way.

You must ignore the child completely, unless he is causing some major destruction. Leave him alone for a moment, and after he calms down, try to talk to him and make him see reason.

2. Tantrums due to frustration or fatigue

This type of tantrum is very common. It’s just a sign that your child is very small and doesn’t have full control over his feelings and emotions. Therefore, he cries and becomes irritable.

Many times, the frustration is the result of not understanding the instructions that are given to him. If this is the case, it’s important that you spend time explaining things and talking about how he feels.

Also, it’s good for you to celebrate his achievements and efforts, because that will strengthen his self-esteem.

On the other hand, your child may have a tantrum simply because he is tired and needs sleep. In these cases, you should take him to bed and let him rest. After a while, the tantrum will go away.

3. Tantrums as a way to refuse to do something

First, you should analyze whether the situation causes some kind of stress or anxiety, because then you shouldn’t force the child to do certain things. But if that’s not the case, then you should downplay it and not give in.

This type of tantrum usually occurs when children refuse to go to bed, go to school or perform a task that has been assigned to them. First of all, the important thing is that you don’t allow yourself to be manipulated because of your child’s apparent sadness or anger.

Sometimes it’s possible to avoid different types of tantrums by warning them in advance about what to do.

This type of tantrum is very aggressive and sometimes can end up producing unpleasant episodes. In them, children can get out of control and, in addition to screaming and crying, hit other people or throw objects around, often involuntarily.

If this happens, the best solution is to take your child to a quiet place and leave him alone as punishment so he can reflect. After 10 minutes, try to establish a dialogue with him in which you explain the reasons why he can never, ever react violently.

It’s important to know and differentiate the types of tantrums, how they originate and how we should react in each scenario.

In these tantrums, the child loses all control and ends up hurting other people or even himself.

To avoid accidents, you must hold him in your arms and speak to him while remaining calm. After a few minutes, he will come to his senses or get tired of fighting with you.

If your child usually has this type of reaction, it’s important that you talk to him and explain the alternative ways he can show disagreement or anger at a time when he isn’t angry. First of all, we must not allow him to hit himself or to strike others.

As parents, it’s very important to understand how our children’s brains work, because in most cases they don’t act in a calculating and intentional way.

In short, they still don’t have control over their emotions or actions, due to the simple fact that their brain is in development and they don’t yet have the capacity to manage their actions.