The Use of WhatsApp in Children

Children are extremely attracted to new technologies and the possibilities that they offer. Their instantaneity and the chance to connect with everyone is great. However, parents should always be aware of the risks they carry. 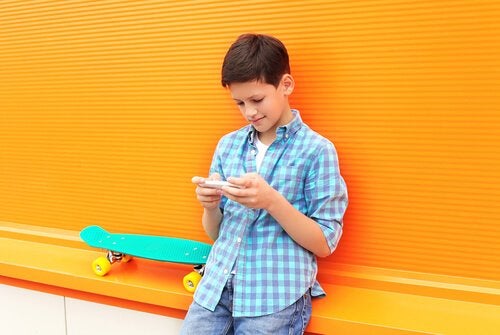 New technologies have influenced and reached all corners of the globe. When it comes to cell phones, it’s safe to say that the use of WhatsApp in children has become “normal.”

Have you had arguments with your children because of this? What should we do in cases like these? We’ll gladly give you some advice in this article.

According to recent posts, 76% of Spanish children between the ages of 11 and 14 use WhatsApp to communicate with their loved ones. This allows us to see just how little children really are when their parents decide to give them their first cell phone.

On the other hand, we can’t help but wonder if it’s actually okay for children to have access to it. Just like with many other apps, it can be a blessing and a curse at the same time. Although it has great advantages, children might use it for unproductive purposes.

Tips for children to use WhatsApp correctly

Children tend to get carried away by the urge to tell their friends absolutely everything that happens to them. Whether it’s because they think it’s funny or simply because they want to establish a bond with someone, the point is that, sometimes, they share things they shouldn’t.

In this category, we can include family information, events of their immediate friends or family, or even gossip about another child.

Teach them that sometimes it’s best to keep things to ourselves and that, once they’ve shared some information, there’s no turning back; and it might lead to bad consequences.

We recommend teaching them to ask themselves what would happen if they shared something before doing it. That way, they’ll be able to think about the possible consequences ahead of time and avoid problems.

2) Raise awareness about the harm of bullying

It’s not uncommon for children who have access to the internet to start bullying other classmates or even friends.

Teach them that, although it may be funny at first, they’re harming someone unnecessarily. Help them realize how awful it is to be laughed at, and how sad it would be for that to happen to them.

This can be quite difficult because parents sometimes are unaware of it; they know bullying exists, but they don’t think their child would ever get involved in it. It’s vital for you to pay attention to what your child talks about on WhatsApp.

3) Control access to information not suitable for children’s age

If you’re a WhatsApp user, you know that we sometimes encounter certain messages or pictures that aren’t even suitable for young adults. That’s why it’s so important that you keep an eye on the information that your child receives or sends through this app.

If you see something on your children’s cell phone that you don’t like, ask them to leave the chat group. That’s probably going to upset them because it might “embarrass” them in front of their friends. But you must remember that being responsible is key and that, first and foremost, you’re their parent and should look out for them.

Instant messaging has made us develop a need to respond to our messages as quickly as possible. Same goes for when we’re waiting for an answer – we get desperate if they take too long to respond. However, this shouldn’t be the norm.

There are certain times when WhatsApp should wait. It’s understandable to pay attention to our cell phone when we’re dealing with something serious, but if we’re having a good time with friends and family, or if we’re doing something important, the most appropriate thing to do is leave our cell phones aside and live in the moment.

It’s necessary for parents to ask themselves if their children really need a cell phone before giving it to them. Think about every single aspect: What are they going to do with it? What will they use it for? Are they mature enough to have a cell phone?

5) Warn them about talking to strangers

WhatsApp is like another social media app out of the bunch. That being said, it can lead to conversations with strangers.

Your children might think that it’s fun to talk to other people and make new friends. However, what they don’t know is that many people pretend to be nice and easy-going, only to eventually take advantage of the persons they talk to.

Make sure you talk to your kids about the importance of being prudent when a stranger talks to them. Let them know about the risks of sending pictures, documents, or any kind of information to a person they don’t know in person.

Encourage your children to use WhatsApp responsibly

Beyond the aspects we talked about in this article, we must admit that WhatsApp is a very useful tool. You can communicate with whoever you want instantly, and it allows people to keep up with what their friends or family members are doing.

However, it must be used responsibly. You don’t have to forbid its use, just establish certain rules and make sure your children follow them. That way, the use of this app won’t become an issue.

On the other hand, if you promote a correct and responsible use of Whatsapp, cell phones and social media platforms, it’ll be easier for your children to be responsible and cautious as well.