Video Game Addiction in Teenagers: What to Know

Video game addiction is a serious problem among some teenagers. Spending hours on their consoles or computers can create significant mental and physical health risks. What can be done to prevent or treat this addiction? 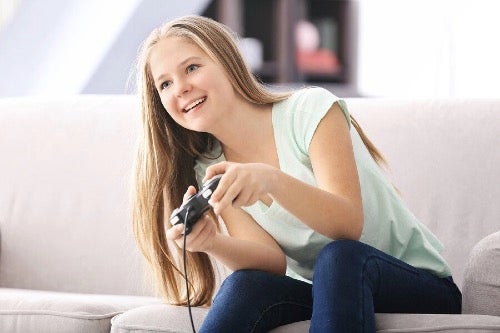 One of the biggest problems facing today’s society is video game addiction among teenagers. Spending hours a day in front of a console or computer screen can be more harmful than you might imagine.

To deal with this situation, it’s important to recognize the symptoms of video game addiction and take appropriate measures to counteract it.

New technologies have created benefits in all areas of life, including entertainment. This includes video games, which can even be a positive influence in certain aspects of a child’s development. However, the problems begin when video games go from a hobby to an addiction.

You need to be able to identify the moment at which the hobby turns into an addiction. This is the key to being able to take action quickly.

It’s recommended that parents limit and control the amount of time their children spend in front of the console or computer.

Time is one of the key indicators that a child is becoming obsessed with video games. Parents should pay special attention if the amount of time spent gradually increases to the point where the child is spending several hours a day playing them.

The teenager’s behavior will change as he or she needs to dedicate more and more time to video games.

Although this addiction can appear any time after children start playing video games, there is an age range in which they’re more likely to become addicted. Boys are more vulnerable between the ages of 12 and 20.

Another common symptom of video game addiction among teenagers is isolation and a lack of socialization.

In these cases, the teenager will prefer to spend hours in front of the console or computer every day to spending time outdoors, hanging out with friends, or doing any other activity at all.

Poor academic performance is another one of the most common symptoms. When teenagers lose control, they play for hours at a time, even into the wee hours of the morning.

This kind of schedule means they’ll be sleepy during school hours and will fail to keep up with their schoolwork. Sleep disorders and changes in sleeping patterns are also symptoms of this problem.

Withdrawal symptoms will also be apparent when the teenager cannot play for an extended period of time. This can result in lack of motivation, sadness, aggressiveness, radical mood swings, and a defensive attitude.

Teenagers with addiction issues also have trouble maintaining stable friendships and personal relationships. The reasons are very simple: a reluctance to socialize and drastic mood swings.

“The problems begin when video games go from a hobby to an addiction.”

It’s recommended that parents establish limits and control the amount of time their children spend playing. In some cases, the use of consoles should be restricted to one or two days a week.

Time is an important factor in preventing your children from becoming addicted. It can also be fundamental to helping them overcome the situation.

If parents believe their child has a video game addiction, they should bring their child to see a psychologist to help guide him or her. In extreme cases, there are also rehabilitation centers. However, the percentage of kids who require such measures is very low.

Parents can also encourage their children to do other activities that aren’t technology-related. More specifically, signing them up for sports, painting or music are all good options for putting an end to their isolation.

Video game addictions in teenagers is a problem in modern society. With this in mind, parents need to take control of the situation. Clear limits need to be set when it comes to video games.