My Child Is Afraid of Firecrackers: What Should I Do?

Feeling fear is quite normal, but it can sometimes be paralyzing. In this article, we're going to talk about children who are afraid of firecrackers and give you some tips to help your child overcome it. 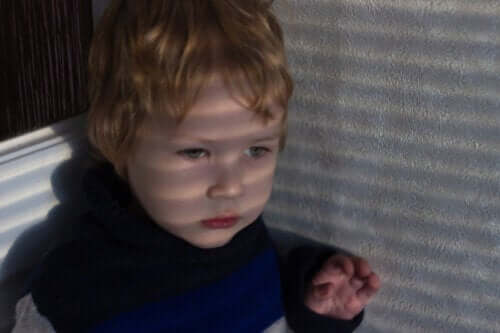 In many countries, it’s quite common to set firecrackers off at parties and celebrations. But not everyone enjoys these loud piercing noises. In fact, many children are afraid of firecrackers. Is your child one of them? If so, you need to read this article carefully, because we’re going to explain what you can do in these cases.

Before covering this topic, we must clarify that fear is a completely normal and natural emotion in human beings. It’s the body’s adaptive response to a situation that we consider to be dangerous or threatening, and a possible danger to one’s survival.

My child is afraid of firecrackers, what should I do?

If your child is afraid of firecrackers, the first thing you should know is that it’s not helpful for you to avoid, or leave situations or places where these small explosives are set off, such as parties and private celebrations.

This can be counterproductive. It’s true that, if you leave a place where firecrackers are being set out, then the child will feel momentary relief. However, if they never have to face their irrational fears, then it’ll be impossible for them to overcome them. And, of course, in the long run, this can affect them greatly.

So what can you do to help your child deal with the fear of firecrackers? Here are some ideas.

If you’re going to a place where you know that they’re going to set off firecrackers, then it’s important that your child knows this in advance. You’ll need to explain to them that, at some point during the evening, they’re going to hear some loud noises produced by these small explosives.

You should then assure them that they’re simply part of the celebration that you’ll all be going to, and that they shouldn’t worry.

In addition to this, so that it won’t scare them, try to watch some videos together of parties or places where firecrackers or fireworks have been set off.

Above all, stay calm. If your child is afraid of firecrackers, then he or she is likely to get scared and even cry uncontrollably.

In this type of situation, you should act with total normality. If the child sees that the rest of the people aren’t scared by the noises, then they’ll understand that it isn’t something dangerous, and that, little by little, they’ll be able to stop feeling that irrational fear of firecrackers or fireworks.

Show understanding of the situation

You should also be empathetic towards your child, and understand that they may be having a really bad time. In this case, communication is fundamental. Talk to your child face to face and explain that you also get scared in certain situations. Assure them that you’re there to protect them and make sure that nothing bad will happen to them.

Fear or phobia of firecrackers?

If you think that your child’s fear of firecrackers is excessive and disabling, then it may not just be a child’s fear, but, rather, a phobia. In this case, the best option is to ask for help from a psychologist specialized in treating phobias.

Phonophobia, also called ligyrophobia or sonophobia, is the term used to describe a specific type of phobia where someone feels an extreme and irrational fear of loud, intense, and usually sudden noises, such as those produced by firecrackers.

In excessively noisy situations, people who suffer from phonophobia can lose control and suffer panic or anxiety attacks.

In addition to the extreme discomfort that they’ll feel, it also incapacitates and limits them significantly. Why? Because they’ll try to avoid certain contexts where their fear will be evident to all those around them.

The importance of dealing with a fear of firecrackers

If your child has a fear of firecrackers, then it’s important that, either at home (in the mildest cases) or with the help of a specialist (in the most severe cases), you begin to treat this fear right from childhood. You should attempt to deal with it the moment that you detect they have a problem.

The sooner you intervene in the situation, the sooner you and your child will be able to lead a normal life. Going to a party or having an evening out won’t be in danger of turning into a stressful, distressing, or frightening situation.

We wish you every success in helping your child overcome their fears!

Everything You Need to Know About Childhood Fear
Fear is a normal response to a new or threatening environment. Children usually express fear as they get older. Learn more about childhood fear here. Read more »
Link copied!
Interesting Articles
Childhood behavior
The Key to Success: An Activity to Motivate Children