Should Children Specialize in One Certain Sport?

Is it a good idea for children to focus on one specific sport from an early age? Or is it more beneficial for them to practice multiple sports? We'll answer this question in the following article. 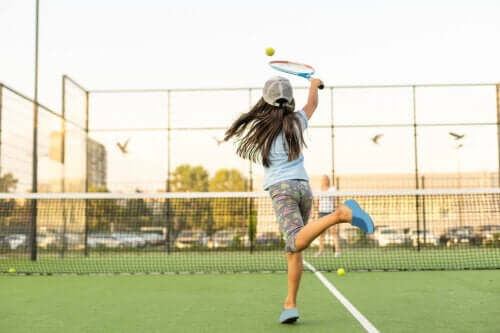 Many parents wonder if their children should specialize in one certain sport at a young age. The truth is that many studies advise against that. In the following lines, we’ll analyze the main conclusions of the most relevant research articles so far that advise against this sports specialization.

The first thing we need to take into account is that early sports specialization increases the risk of injuries for children and teenagers.

Not only can this drive the child away from sports during childhood, but it may also lead to very negative consequences in their adult life. Instead of that, specialists recommend that children combine different sports.

Early specialization in one certain sport may cause injuries

Many athletes play the same sports in clubs and school teams during the same season. This increases their playtime, but it may also increase the risk of getting overuse injuries.

In this regard, it should be mentioned that a study revealed that high school athletes who specialize in a single sport are 70% more likely to get injured during the season than those students who play multiple sports.

The amount of time invested in playing and training increases the stress intensity in the muscles, bones, tendons, or growth plates. The combination of fatigue and stress for repetitive training may do more harm than good to the child’s developing body.

Regarding the need to reach a certain degree of sports specialization to develop abilities at the elite level, another piece of research concluded that such intense training in a single sport to the exclusion of others should be delayed until late adolescence. This is to optimize success while minimizing injury, psychological stress, and burnout.

It should be noted that, according to another study, early sports specialization is tied to increased injury rates in college athletes. This means that the risk of injuries goes beyond the school ages.

Other risks of early sports specialization

On the other side, it may also cause social isolation, especially due to the great amount of time children and adolescents invest in training and competitions.

Lastly, early specialization may cause such exhaustion that the child or adolescent may decide to quit the sport altogether. This may also lead to problems among the adults in the young athlete’s life, as this can surely cause disappointment and frustration.

Early specialization is no guarantee of success

In spite of all the effort it involves, children who specialize in one certain sport don’t have success guaranteed. This is the conclusion of a study published by the Sport Health journal in 2018.

According to the authors of the study, parents and coaches may be tempted to encourage young children to specialize in one certain sport from the beginning in order to maximize the child’s possibilities of becoming an elite-level athlete. However, this doesn’t necessarily have to be the best road to success.

In fact, according to the authors of the article — and most of the professionals in this area — children would benefit more from practicing various sports, before specializing in the one that interests them the most.

Practicing different sports helps children have an integral development of all their physical abilities. Besides, they’ll have the opportunity to go through different experiences and find the sport that they truly wish to specialize in – that is, if there actually is one they want to focus on.

But there’s no need for them to practice them all at once. They can practice two sports simultaneously or switch from one to another according to the time they have available. This will broaden their vision and open up different opportunities.

In any case, parents shouldn’t lose sight of the need to practice a basic sport. This will help lay the physical. foundations for any sport that requires teamwork and the development of multiple abilities. Track and field is a good example, as this sport involves not only running, but also jumping, dodging, reacting, throwing different objects, and teamwork, among others.

Can a Child with Asthma Participate in Sports?
Many parents who have a child with asthma aren't sure if it's safe for them to play sports. It can actually be beneficial for their condition. Read more »
Link copied!
Interesting Articles
Tips for raising your child
What If a Family Member Undermines Your Authority