Do you reward and punish your children for their grades? Before you do that, analyze what those numbers really represent. Today, we want to talk about why your children's grades won't determine their success. 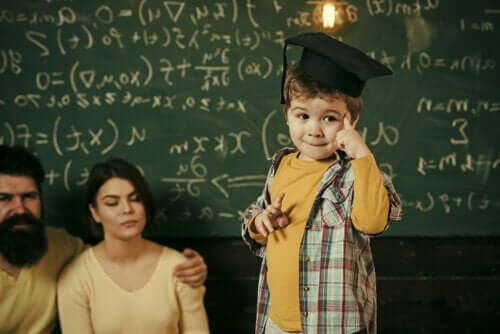 If you’re a mother, your children’s grades are probably one of the issues that concern you most. At the end of every school year comes the dreaded report card and, with it, their grades. These simple numbers and letters seem to determine whether a child is valid and intelligent, and if they’ll succeed in the future. However, not only is this classification system obsolete, but it can sometimes be harmful and even cruel to children. The truth is, children’s grades won’t determine their success.

In our societies, for hundreds of years now, we’ve been accustomed to evaluating students by means of a numerical system. When the grades they obtain aren’t what parents expect, we become concerned. At the same time, children feel inadequate and families face great friction and conflicts.

However, as we’ve said, children’s grades won’t determine their future success. So, it’s time we started to understand what these numbers really mean.

What are the grades based on?

We believe that grades tell us about our children’s intelligence, their abilities, and their intellectual level. We think they represent the effort children have made, how much they’ve paid attention, and the willingness they’ve had to learn.

From these numerical data, we deduce if a child is valid, adequate, and will be successful. We feel proud, ashamed, angry and content based on these ratings, and reward or punish our children accordingly. However, can we really get all that information from a single number? The answer to this question is a clear NO.

Children receive grades based on their performance on one or more written exams. First of all, such tests not only tend to overlook all kinds of practical learning. What’s more, they primarily value memorization.

Therefore, children who are able to retain accurate data in their memory and spit it out on tests will get higher grades. This is true even if they don’t understand what they’re writing and forget it the next day.

Tests don’t evaluate the actual understanding of the subject or the significant learning that has taken place from it. Nor do they take into account the children’s effort, interest, or attitude. They only value a specific and concrete result, ignoring the process.

In addition, they completely ignore the individual differences that exist in children. In traditional tests, everyone has to fit into the same mold. And if they don’t, they are labeled, literally, as insufficient.

Given all of the above, it’s important to be clear that your children’s grades won’t determine their success. In the first place, because they aren’t a reliable measure of intelligence, ability, or attitude.

A child can be very capable, curious, skillful, and competent – even if their grades don’t reflect it. At the same time, a child can have a good disposition to learn and great perseverance and still get low grades.

But, in addition, grades aren’t decisive because what they measure isn’t really relevant to success in adult life. In the real world, the ability to memorize is of little use, while other skills, such as social skills, creativity or self-confidence are what really matter.

Focus on the process

So, when it comes to your child’s education, try to focus on the process rather than the results. Be sure to instill in your child a curiosity for learning, the development of critical thinking, perseverance, and responsibility.

Of course, you should encourage your child to work hard and meet the challenges of school. But don’t lose sight of the fact that grades are only a number. They don’t define your child as a person and won’t determine their success.

Fortunately, more appropriate and diversified pedagogies and evaluation methods are already beginning to emerge. But, until then, let’s stop labeling our children based on such out-of-context data.

Stimulating scientific thinking in children has enormous benefits. Not only on an academic level, but also in their daily lives…