Why Do Children Love Dinosaurs?

Airplanes, princesses, animals, unicorns... children go through different interests as they grow older. One phase that most kids go through is a dinosaur obsession. Find out why your child loves these ancient creatures. 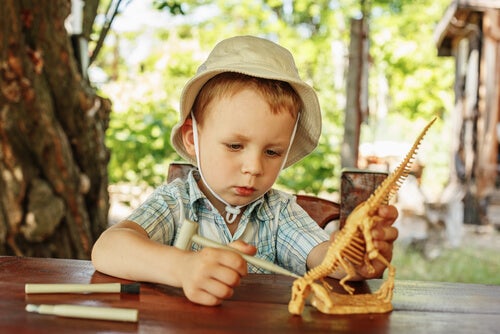 If there’s one thing that children love, it’s dinosaurs. Many kids build up an impressive collection of toys. And when it comes to dinosaurs, there is a whole world to discover.

These ancient reptiles came in all varieties, from tiny, ferocious raptors to gentle herbivorous giants.

The dinosaur era holds a special fascination for people of all ages, but particularly for children.

This passion for dinosaurs is often sparked by movies and books. Their dragon-like appearance captures the attention of little ones, and even older children aren’t immune to the thrill of films like Jurassic Park.

Although science has done away with certain myths about dinosaurs, these ancient beasts continue to live a life of their own in children’s imaginations.

In this article, we’ll learn just why dinosaurs are so fascinating to your child.

Why do children love dinosaurs?

1. They dream of being as strong as them

Dinosaurs are known for being powerful, fierce and almost invincible. These are qualities that almost any child would like to have.

When children begin to discover the world around them, strength and power are aspects that they admire and desire. They look up to creatures that know how to defend themselves and try to imitate them.

When children play and put themselves in the place of a real dinosaur, they’re experimenting with these characteristics and expressing new facets of their personality.

2. They are intrigued by the mystery of their disappearance

Children’s interest in dinosaurs also has to do with their sudden and mysterious extinction.

This is a phenomenon that still intrigues people of all ages and inspires scientific debate. For children, these big questions are fascinating.

This puts dinosaurs in the same category as mythical creatures. They’re like characters from science fiction. They aren’t quite real, like a wolf or an elephant, but neither are they imaginary, like a dragon.

Dinosaurs have a role all of their own in a child’s imagination. They’re beings that once existed, but aren’t around anymore.

3. They are proud of being an expert

You might have heard the story of the Natural History Museum in London, which admitted to a mix-up in the information about one of the specimens on display – all thanks to a 10-year-old boy.

The child visited the museum with his family, and noticed a mistake in the name of one of the dinosaurs. He told a museum attendant about the error, and after checking their sources, the gallery recognized their mistake.

Imagine how proud children feel when they’re able to impress their parents by reeling off the long, complicated names of dinosaur species. They know each dinosaur by name and collect books and figurines.

Young dinosaur fans watch every documentary about the lives of their favorite creatures with close attention.

Your child’s knowledge will often surprise you. The satisfaction of being an expert encourages children to find out even more about the world of dinosaurs.

4. They are a connection to the past

Dinosaurs represent the distant past. A time before mom, dad and grandparents, so long ago that it’s very difficult to imagine.

Children are curious about the origins of the world they live in. What was the earth like? Who were the first people?

Children who are interested in dinosaurs understand that these beasts belong to a world beyond their family and surroundings. This is something positive and stimulating for a young mind.

5. They are not scary

Children’s fascination with dinosaurs is also due to the fact that they no longer exist. These giant lizards ruled the earth long before people came along. This makes them fundamentally non-threatening.

The fact that these terrifying creatures don’t share our planet today is very comforting to children. Kids know that these monsters from the past cannot come and attack them, however ferocious they were in their time.

Finally, keep in mind that children tend to go through phases. Just look at the toys from their last birthday that they’ve already cast aside. So your child’s addiction to everything dinosaur-related may not last.

But even if your child’s fascination with dinosaurs is temporary, it can be good fun for both of you.

Learning about dinosaurs is a chance for kids to explore the world, feed their creativity, gain new knowledge and spark an interest in science.

And who knows – maybe you have a budding palaeontologist in the family!