Achondroplasia in Children: Causes and Characteristics

If you haven't heard of achondroplasia, or if you're not sure what it is and what the consequences are, we'll tell you all about it in this article. 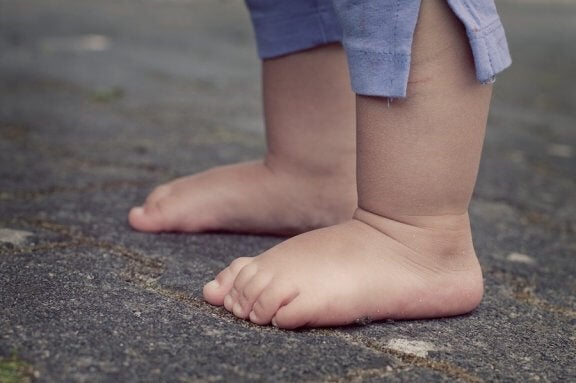 Achondroplasia in children is one of the most commonly seen forms of dwarfism. In every 25,000 children born, one has this genetic bone condition.

Achondroplasia in children occurs due to an alteration in cellular DNA. The change affects receptors of growth factor 3 which are present in fibroblasts. This leads to an anomaly in cartilage formation and later blocks normal bone growth.

There is an increased risk of death during childhood because compression of the medulla and respiratory system obstruction can occur.

The probability that a child whose parents don’t have the condition will have achondroplasia is 1/25,000. That rate rises to 50% if one parent has the condition, and 75% if both parents do.

Additionally, there is a 2.5% probability that a child will have homozygous achondroplasia if both parents have the condition.

Signs of Achondroplasia in Children

Signs of achondroplasia can be evaluated based on a diagnosis during fetal development. It can be inferred from bone measurements, but after birth it can be diagnosed with certainty.

Treatment for Achondroplasia in Children

There is no pharmacological treatment for achondroplasia. Despite this fact, they’ve been able to identify the gene that acts as a carrier on chromosome 4.P and 16.3, known as the short branch of chromosome 4.

Children with achondroplasia have normal intellectual capacity. However, the physical characteristics are readily identifiable. The average adult height for a person with this condition is 47.2 inches, or 1.20 meters.

The long bones such as the femur and humerus are shorter compared to the forearm (radius and ulna) and the lower leg. The head is larger compared to body size, with a large forehead and flattened nasal septum. Some people have bone curvature, which can be very painful.

In some cases there are dental problems, involving crowded or twisted teeth. In general, feet can be wider, with narrow toes and flat soles. Muscle tone is weak, leading babies to develop more slowly at first.

They may also have what is known as trident hand, in which the space between the middle and ring finger is larger.

In addition to the physical characteristics, children with achondroplasia can present certain associated illnesses as they develop. But as long as these are monitored, a child can lead a normal life and develop to adulthood.

5 Common Mistakes when Dealing with Childhood Illnesses
We should never improvize when it comes to dealing with childhood illnesses. It's always best to get help from a specialist. Read more »
Link copied!
Interesting Articles
Illnesses in children
Marfan Syndrome in Children: What You Should Know