Are Antibiotics Effective Against All Viruses?

Are antibiotics effective against all viruses and bacteria? Due to the rise of antibiotic-resistant diseases, should we look for other alternatives? 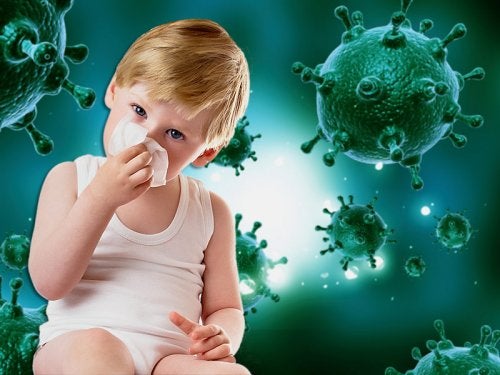 Several times a year, many parents take their children to the doctor due to a throat infection. Usually, they expect a prescription of antibiotics, to speed up their recovery, and lo and behold, they just get some over-the-counter meds. So the question arises: Are antibiotics effective against all viruses?

Antibiotics were first prescribed during the ’40s to fight off bacterial infections. Usually, antibiotics kill bacteria or stop them from reproducing. This way, our immune system can fight the disease. Thus, they’re a backup tool for cases where our immune system alone isn’t enough.

Antibiotics were discovered by chance in 1928 by Alexander Fleming after seeing the effects caused by a fungus called Penicillium notatum. He had a messy lab and when he was about to throw out some bacterial culture, he saw that a fungus grew there, killing all bacteria.

The difference between viruses and bacteria

To understand what antibiotics do and how effective they are against viruses, you need to know what they attack. Do antiobiotics attack viruses or bacteria?

Bacteria are prokaryotic microorganisms. They’re usually classified by their shape: cocci, bacilli, budding and appendaged bacteria, and others. Some are beneficial to man, like Lactobacillus, and others aren’t, like the Mycobacterium tuberculosis.

On the other hand, viruses are an infectious agent and need a host to survive. This is why they’re immune to them. Both are infectious but they’re two very different kinds of microorganisms. Because of their structures, they’re effective against bacteria, not against viruses.

Are antibiotics effective against all viruses? The answer is no.

Most infant infections are viral and aren’t treated with antibiotics. In most cases, viruses can give way to more benign diseases than bacteria like, for example, the flu, measles, bronchitis, chickenpox, and most anginas and gastroenteritis.

On the other hand, bacteria can cause more dangerous infectious diseases like rubella, pneumonia, or otitis. There is, however, a small group of diseases that can have a viral and bacterial origin: anginas, conjunctivitis, and meningitis.

To identify if the infection is viral or bacterial, the doctor runs a test and, if unsure, they can request a culture to confirm the diagnosis, and see if antibiotics can be of use.

What happens if you take too many antibiotics?

KidsHealth advises that taking antibiotics for viral diseases is useless. This can also create resistance against possible bacterial diseases.

Using antibiotics regularly can change the bacteria’s genetic material. Thus, said diseases develop a resistance that makes them immune. This is known as bacterial resistance or antibiotic resistance.

Currently, this resistance has grown and the medical field refers to these microorganisms as superbugs. These require very strong antibiotics with heavy side effects. These infections are caused by pneumococcus (pneumonia), meningococcus (meningitis), or infections caused by antibiotic-resistance bacteria in hospitals.

Final notes: Are antibiotics effective against all viruses?

Antibiotics aren’t effective against viruses. Only use them against bacteria and other pathogenic microorganisms. Abusing antibiotics can create superbugs and also kill bacteria that our bodies need.

The World Health Organization has made resistance diseases a public health emergency. The 2015 World Health Assembly created an action plan that includes:

“Sometimes the cure causes the disease.”

Lack of Vaccination and Increased Cases of the Measles
Since the year 2016, the world has seen a 30% increase of measles cases, mostly due to lack of vaccination against this disease. Read more »
Link copied!
Interesting Articles
Good habits
Common Myths About Vegetarianism