The Benefits and Dangers of Ibuprofen in Children 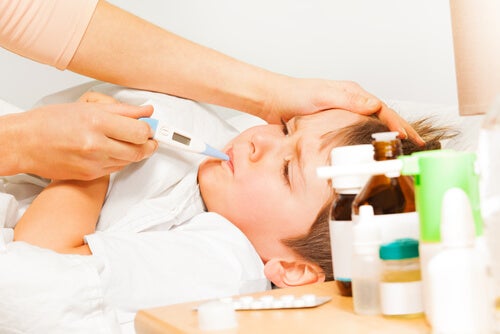 Is it okay to use Ibuprofen in children? Ibuprofen is a fairly common medicine. We use it to lower fever, inflammation, and relieve headaches and joint pain among other things.

It’s what we turn to first when suffering with pain of different types and is never missing in our home.

There are many parents who are concerned about the use of Ibuprofen in children, especially when their kids are very small.

On the one hand there are parents who administer it at the slightest sign of anything, and there are those who hold back for fear of making things worse.

The truth is that both attitudes are totally wrong and we’re going to discover why.

What is Ibuprofen and what does it do?

Ibuprofen is an anti-inflammatory medication that doesn’t use any type of steroids, unlike corticosteroids. Despite this, its analgesic effect is high on the range, compared to other products.

The fact that it doesn’t contain steroids in its formula is the reason why so many people use it in a generic way and even without it even being prescribed by a doctor.

In addition, this medication is an antipyretic. This means that it has the ability to lower temperature in the case of a sustained fever. This is the main reason why some parents resort to this formula.

Contraindications of Ibuprofen in children

Although it is the safest and most effective anti-inflammatory medicine that exists for children, it does also have contraindications.

Children under 3 months can’t take it, and those who are 6 months old can only do so under the approval of the pediatrician. The child’s age is, therefore, a determining factor.

Children who suffer from renal, liver and kidney problems and allergic reactions to aspirin cannot take this medicine either. Toddlers with anemia or blood clotting problems should also avoid this formula.

However, in most cases taking this medication is quite safe provided it is done in the correct doses.

Dosage of Ibuprofen for children

The first thing that we should take into account is the concentration of Ibuprofen that we have at hand.

We must remember that it exists with a 4% or 2% concentration. The first is, naturally, more concentrated and everything will depend on the child’s weight and the time between doses.

Children weighing 5 to 9 kilos can take up to 2.5 ml three times a day if the medication has a concentration of 2%. The difference is considerable if we use Ibuprofen with 4%: a child of 7 to 9 kilos shouldn’t take more than 1.25 ml three to four times a day.

When the weight rises to 10 kilos, the dose increases to 5ml in the case of ibuprofen to 2%, and 2.5ml in the highest concentration.

Can it be mixed with other medications?

Ibuprofen can be mixed with other medications if your doctor recommends it. However, in certain cases, this is not recommended. One example is the use of Ibuprofen in children who are taking other medication containing corticosteroids.

Some parents often mix paracetamol with Ibuprofen. They think that, by doing this, they will be able to lower the child’s temperature more quickly and effectively. These days we know that combining these two medications doesn’t help at all in this respect.

Ibuprofen in children: the facts

Nowadays experts have shown that this medicine can lower a child’s temperature in 90% of those who have it prescribed.

Another statistic shows that at least 75% of children manage to maintain this improvement for four hours after the administration of the medication.

How long does it take for the temperature to drop? It usually takes two hours after the ingestion of the medicine. After the fourth hour, the temperature will go up again, and this explains why doctors prescribe 3 to 4 daily doses.

In addition, if we compare Ibuprofen and paracetamol, the one that has greater antipyretic power is the former. Its speed in bringing the temperature down is also greater, although this doesn’t mean that paracetamol isn’t an effective medication as well.

In conclusion, doctors recommend Ibuprofen for children, as long as we follow some simple guidelines.

Doses, contraindications and medical recommendations should be taken into account before administering this versatile anti-inflammatory medicine. And, of course, it’s always best to consult the pediatrician first.