This genetic disorder (discovered more than four decades ago) causes severe infections in babies due to a series of immune system deficiencies. If it's not treated early, it can pose a risk to the baby's life. 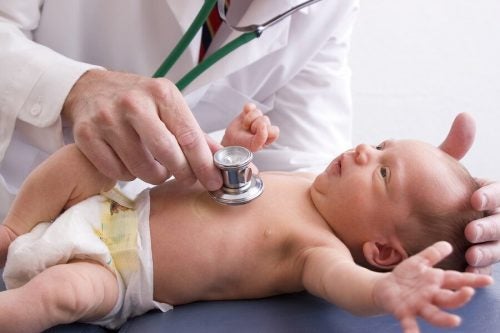 Babies who suffer from bubble baby disease experience serious infections due to an immune system deficiency, which makes any environment dangerous for their health.

Babies who are born with Severe Combined Immunodeficiency (SCID or bubble baby disease) tend to have an altered development of functional T cells, which are in charge of offering them an adaptive immune system.

Additionally, there’s a lack of B cells, which results in a great number of fatal asymptomatic defects at birth. However, signs of this disease tend to appear during the first few weeks after birth.

Babies with this disorder are extremely vulnerable to infectious diseases, as the environment that surrounds them can be fatal.

The diagnosis of this syndrome is carried out by sequencing fetal DNA, obtained through prenatal diagnostic tests such as amniocentesis or chorionic villus sampling.

Among the most common symptoms, which tend to appear during the first weeks after birth, are:

Present in the first weeks and can be very severe, such as pneumonia, meningitis, sepsis, etc.

This is due to poor absorption of nutrients, as a consequence of infections. Diarrhea produces dehydration and weight loss, which may threaten the baby’s health.

Rashes are the first symptom to appear, although this disease is usually asymptomatic. It’s usually erythematous and manifests in the whole body.

Neurological complications can be found more frequently in newborns with this disorder, including deafness and vision problems.

Lastly, having this condition means the baby will develop multiple infections, either because of bacteria, fungus, viruses or the so-called opportunistic microorganisms.

“Babies with this disorder are extremely vulnerable to infectious diseases, as the environment that surrounds them can be fatal.”

Currently, there are several methods to treat this syndrome. The most common are:

It’s very effective if the transplant is carried out within 6 months after birth. If the treatment is done within 3 months, the baby has the highest chance of survival.

Enzyme replacement therapy is very effective when there’s a deficiency in adenosine deaminase. Doctors inject the enzyme combined with polyethylene glycol, which mitigates the effects of the disorder. However, this is a very expensive treatment.

This therapy has several advantages because of the selective growth of the transferred cells. It has a high success rate.

The first weeks of the baby’s life are crucial for the implementation of such therapies, given that in this period the baby still has the mother’s antibodies. It’s a precious opportunity to carry out the procedure.

If, on the contrary, you don’t act quickly, the very first infections will start to show up, which then increase the morbidity of the disease. At this moment, any action to fight the disease will be less effective.

Also, parents of children with this disorder must keep in mind that within the first two years of the baby’s life, mortality has a 100% probability of happening if there isn’t surgical intervention. This is why little ones who suffer from this condition are considered a pediatric emergency.

It’s important for parents of children with bubble baby disease to be well informed, since there’s approximately a 25% chance of autosomal recessive inheritance. This can mean homozygous mutation, which is the formation of an egg or zygote as a result of the union of two sperm cells that have one or two pairs of identical genes.

In this sense, 50% of generations can carry this gene. It’s important to emphasize that the mother is the carrier.

You must act as quickly as possible if your baby has this disorder. This way, you can reduce the risk of complications and infections that can lead to undesired outcomes for your baby’s health.