What Should I Do If My Child Has Angiomas? 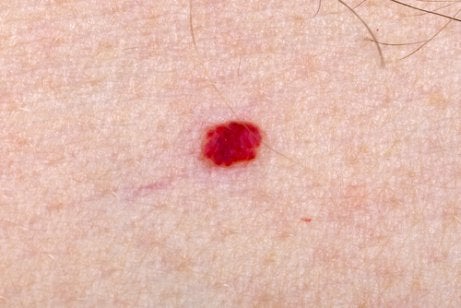 Angiomas or hemangiomas are reddish lesions on the skin that can be superficial or profound. They usually appear like red bumps on the skin’s surface.

They’re generally located on the face, scalp or back. However, angiomas can appear on any area of the body. Some children are born with them and, in rare cases, adults can develop them as well.

Angiomas affect an estimated 8–10 percent of children, though there are no exact figures. In any case, a great percentage of angiomas that appear during a child’s first year of life disappear on their own in subsequent years.

In technical terms, angiomas are benign tumors. Experts believe they’re a developmental defect that form because of hereditary factors. These tumors consist of an abnormally dense group of blood vessels. This can mean capillaries, veins or arteries.

While angiomas often appear as a small red mark, they can grow rapidly during the child’s first year of life. As some angiomas grow, they turn into reddish spongy protrusions. Angiomas never become malignant tumors.

Some studies have shown that angiomas are more common among premature babies. The same is true for babies with low birth weight.

Furthermore, baby girls are three times more likely to develop an angioma than boys. And while most cases consist of only one angioma, some babies develop more than one – particularly in cases of multiple births.

Angiomas can be either superficial or profound. If you believe your child‘s angioma is causing harm, then you should talk to your pediatrician. A medical professional will be able to make a precise diagnosis and determine the level of seriousness.

According to the location and the way in which it evolves, angiomas fall into two different categories:

Typically, angiomas fall into the first category – that of vascular tumors. Their evolution consists of two phases: A proliferative phase and an involutive phase.

The proliferative phase is the period in which the tumor grows. This growth is rapid and occurs during the first 9 months of a baby’s life.

The involutive phase is the period in which the angioma fades away. According to research, these tumors disappear in different proportions according to the the child’s age, as follows:

As for vascular tumors, no treatment is required as they tend to disappear on their own. In general, these types of angiomas don’t present any threat to your child’s health.

Doctors simply recommend allowing time to take its course, while keeping your child’s angioma under observation.

However, some cases of angioma do require medical treatment, as in the following circumstances:

If an angioma is located near the eye, it can cause problems with a child’s eye sight. An angioma near the mouth is a common cause of swallowing difficulties.

As stated above, angiomas located in the diaper region can cause ulcerations. These lesions are extremely painful and difficult to eradicate.

If treatment is required, doctors will most often administer glucocorticoids (steroid hormones) in differing amounts. Dosages tend to be high, and treatment usually lasts several weeks.

As glucocorticoids have side effects like difficulty sleeping and gastrointestinal disorders, doctors only recommend treatment in specific cases.

Superficial angiomas are the easiest to treat, and they’re also the most common. However, as we’ve mentioned above, they can sometimes be deeper.

In fact, a simple spot on the skin can be a symptom of a larger tumor underneath the skin’s surface. In this case, you’ll need to consult with a specialist to obtain an accurate diagnosis and know how to proceed.

The treatment for deeper vascular-capillary malformations usually consists of laser therapy. This is a very safe procedure and usually causes no pain. Another advantage is that laser treatment very rarely leaves a scar on the skin.

Keep in mind that only 1% of vascular tumors lead to severe complications. This percentage refers to death caused by side effects of typical angiomas.