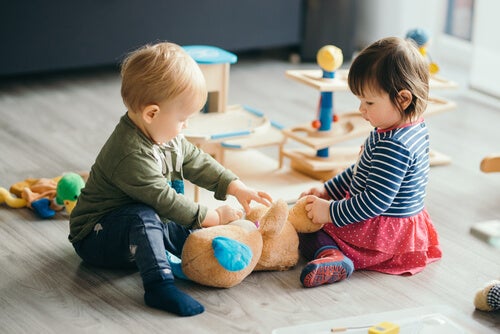 The contagious diseases that spread in daycare centers are well known. That’s why many parents worry about their children’s exposure and vulnerability to viruses during this stage.

It’s normal for children to suffer from colds, bronchitis, otitis or laryngitis when they first begin daycare. Yet this shouldn’t worry you, as it’s a natural process that helps children build their immune systems.

A child’s immune system is activated when faced with the stimuli of infectious agents, such as bacteria and viruses. This makes the child’s defenses stronger and, in the event of subsequent contact with the same pathogen, awakens his immunological “memory.”

It’s very normal for a child to get sick at a daycare center, but this will make his body cope better with viruses and bacteria.

If the child first has a cold and then laryngitis, it’s a sign that her immune system works correctly.

Children are exposed to several types of diseases that spread in daycare centers, so we must be very attentive and informed about each of them.

Children who attend daycare centers from a young age suffer from gastroenteritis before those who stay at home, but they develop fewer of these infections during the preschool years.

6 Diseases that spread in daycare centers

The roseola or sudden rash was discovered after the five exanthematous diseases (measles, scarlet fever, rubella, varicella and megaloeritema). So it’s also known as the “sixth disease.”

It begins with a very high fever, followed by a skin rash that first appears on the torso and expands toward the extremities.

These small pink spots don’t sting and remain on the skin for 3 to 7 days, during which time the fever decreases. All of this is accompanied by nasal mucus, a sore throat and redness of the eyes.

The disease usually ends without complications.

Among the diseases that are spread throughout daycare centers are ear infections. Otitis is inflammation of the middle ear, which is usually caused by a previous respiratory infection due to the accumulation of mucus.

It’s natural that children are more vulnerable to ear infections because their Eustachian tubes are even shorter, wider and more horizontal.

If a child suffers from this disease, he’ll make noises with his throat, cough, have an ear ache and also have a runny noise. Sometimes fever also occurs.

This disease occurs mainly in younger children and is the most common illness caused by the rotavirus.

The main symptoms are diarrhea, vomiting, abdominal pain, fever and the presence of blood in mucus in some cases.

It can easily spread through diaper changes or when children are cleaned, so it’s very important that hygiene is impeccable.

Good hydration and an astringent diet can improve one’s health significantly. Antibiotics are recommended only if symptoms don’t improve naturally.

Herpangina is a very common infection in babies, which occurs as red dots on the back of the mouth that become small ulcers. “Hand-foot-mouth” disease manifests in the same way, but on the hands and feet.

Among the main symptoms are fever, sore throat and general malaise, even before the presence of ulcers. The latter disappear on their own after 10 days.

This infection can be spread by contact or through the air. Maintaining good hydration and hygiene will reduce the risk of infection.

This is one of the diseases that spreads most quickly in daycare centers. It occurs when the conjunctiva, the membrane that surrounds the eye through the inner area of the eyelid and reaches the anterior part of the eyeball, is inflamed.

It’s common in young children and can be caused by irritation, allergy or infection.

The eye begins to turn red because of the irritation and produces more tears, but these increase the feeling of grin and painful itching.

Among the most common symptoms of these conditions are fever, runny nose and nasal congestion. They aren’t serious diseases, but they increase the sensation of respiratory distress and can cause greater discomfort to your child.

They can also cause loss of appetite and vomiting.

On the other hand, pharyngitis is usually accompanied by a sore throat and cough with mucus or phlegm.

These diseases generally disappear after a few days, but antipyretics can be used to control fever and reduce discomfort. Mucolytics and expectorants aren’t recommended unless directed by a doctor.

Viruses offer protection up to age 6

Babies that attend daycare get more infections than those who stay at home. This is because they’re closer to other children, as we mentioned earlier.

A recent study found that these children, because of their early exposure to the virus, were protected against these germs between 3 and 6 years of age.

Marieke de Hoog, the author of this study, explained that “daycare accelerates the time when gastroenteritis is suffered (before the age of two), but doesn’t increase the incidence, since it immunizes them in the preschool stage, before compulsory education.”

In addition, he said that “it is possible that the protective effect persists beyond the age of 6, although more research is needed to support this idea.”

The study, involving more than 2,200 children under 6 years of age, was published by Pediatrics Magazine.

It noted that 83% of children had attended daycare before their first birthday, and scientists found a 13% higher rate of acute gastroenteritis or intestinal flu among children in daycare centers in their first two years.

However, with good hygiene and control, we can try to prevent them. The center should inform you in case your little one presents any symptoms.