It's normal for children to get sick with various contagious illnesses while they're at school. That's why it's important to be informed about them. We'll show you some preventative measures you can take in this article. 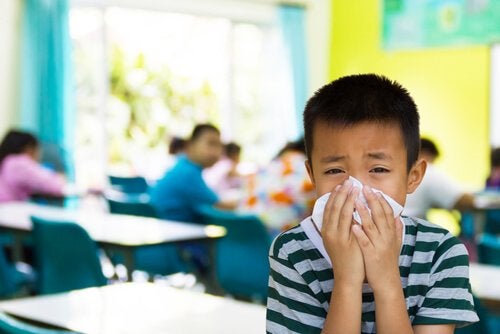 Once your children start going to school, they’re prone to several contagious illnesses, some of which are even quite dangerous.

You can take certain measures to prevent the disease. However, you often can’t avoid them because they spread very easily.

The best way to take care of your child’s health is to know about what these contagious illnesses are and how to avoid spreading them. The most common ones are:

The measles is caused by a virus in the Paramyxovirus family. It grows in the inner mouth, cheeks and palate. As the days go on, it expands to other parts of the body like the face and neck.

Some of the main symptoms are rash, fever, sore throat, and white spots inside the mouth. Sometimes, it can also cause muscle pain.

This involves inflammation of the gastrointestinal tract. Specifically, it affects where the stomach and small intestine meet.

Its main symptoms include diarrhea, vomiting, cramps and abdominal pain. Before your child catches it, it’s very important to keep him hydrated and on a good diet.

It’s very common for children to get pediculosis, commonly known as lice. They spread easily among children.

These parasites are annoying and can make your children uncomfortable. They’re mainly attracted to clean hair, but any child can get them. There are many products that can help you get rid of them quickly.

You can diagnose conjunctivitis if your child has a sclera (yellowing of the white part of the eye) or the lower part of his eyelids are red.

It spreads when an infection or another irritant agent inflames the transparent membrane that covers the whites of the eyes and inside the eyelids. Some of the symptoms are watery eyes and eye discharge. You need antibiotics to treat it.

Also called varicella, this illness is characterized by skin rashes and fever. The first symptoms that show up are blisters all over the body. Then, the child will have itching, high fever, vomiting, nausea and loss of appetite. It’s extremely contagious.

It’s normal for children to get diseases easily until they’re 12 years old. This is because their immune system hasn’t fully developed yet.

Bronchitis occurs when the bronchi are inflamed, which binds the trachea to the lungs. The most common symptoms are difficulty breathing and constant coughing.

Your child could also feel general malaise and sometimes a fever. Like chickenpox, bronchitis is highly contagious.

Mumps are caused by a virus called paramyxovirus, involving inflammation of the parotid glands. These glands are responsible for producing saliva.

It usually spreads through the air by coughing, sneezing, contact, and even talking. This makes it one of the most contagious illnesses.

How to prevent the most common contagious illnesses in school-age children:

As we mentioned earlier, it’s really difficult to prevent children from getting sick when they’re constantly around so many other children.

However, with a series of preventative measures, you can significantly reduce the chances of this happening. Some of the actions you should take include:

These are just some of the contagious illnesses that are common among school-age children.

Many of them are hard to prevent. It’s important to know about vaccinations and what to do if your child gets sick. Before worrying, you should consult your pediatrician.