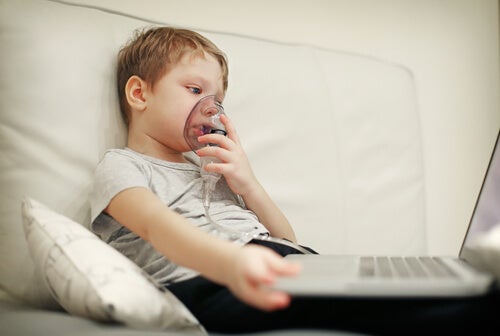 Cystic fibrosis in children is a condition that every parent, or every person planning to become a parent, should know about. This is due to its symptoms, which make it difficult to know when something is wrong without first understanding the condition.

If the symptoms of cystic fibrosis are overlooked, they can cause unfavorable situations in the child. Some cases can even be fatal.

What is cystic fibrosis?

Cystic fibrosis is a chronic hereditary disease with autosomal recessive dominance. This means that a parent can pass on the gene to his or her child without having suffered from it personally.

For the disease to manifest in the child, it is necessary for both the mother and father to be carriers of the gene for cystic fibrosis.

Cystic fibrosis in children is a serious illness that can cause death at an early stage of life if it isn’t diagnosed or treated properly.

Children suffering from cystic fibrosis have an anomalous functioning of the processes and cells involved in the production of:

The problem with this condition is that cystic fibrosis in children causes changes in the nature of mucus, gastric juices and other components that serve as lubricants or that break down nutrients. With this condition, they have a thick and sticky consistency.

This implies that something like the common cold, where mucus allows the body to remove fluid from the lungs and respiratory passages, becomes a serious problem in the case of cystic fibrosis. The mucus thickens and has the potential to obstruct respiratory passages.

Other complications of cystic fibrosis in children

When the respiratory or digestive tracts become blocked, several complications arise, but this isn’t the only way in which the disease represents a danger.

Even if the dense layer of mucus in the lungs or intestines is not problematic, it prevents germs from being excreted through the body’s normal processes.

These germs reproduce in the thick fluids found in children with cystic fibrosis, causing nests of infection in the body that can become quite serious, even to the point where a lung transplant may be required in order for the child to survive.

Unfortunately, a cure for cystic fibrosis hasn’t been developed yet, which means that the treatments and practices to overcome this disease are preventative in nature.

Until a few decades ago, children born with cystic fibrosis had an average life expectancy of only 6 months. With the enormous evolution of health technologies and processes, as well as the knowledge of this disease, the life expectancy can be around 50 years on average in developed countries.

Cystic fibrosis in children requires daily disciplined care in order to avoid, at all costs, the spread of any disease that could cause mucus to be produced.

The treatment of cystic fibrosis, in addition to de facto precautionary measures regarding contagion, incorporates the use of vaccines and antibiotics, as well as drugs for opening the airways or thinning the mucus.

With early detection and discipline in terms of disease management guidelines, it’s quite possible to have a good quality of life.

Detection of cystic fibrosis in children

Even with several symptoms present, the presence of cystic fibrosis in children is not conclusive without the diagnosis of a medical professional.