Dealing with Blocked Noses in Children

In this article, we'll take a look at how nasal congestion affects children and how to deal with it. 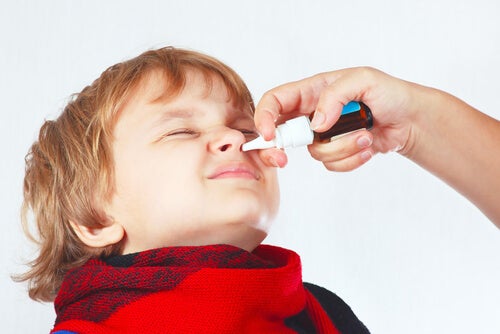 Blocked noses are a common problem during childhood. Little ones have lower defences against the common cold and influenza.

A blocked nose in children is often a symptom of one of these common viral infections. If symptoms persist, however, it may be due to an allergy.

When we develop cold-like symptoms due to a viral infection, the nasal passages swell up and can feel blocked. This symptom usually gives way to clear, runny mucus that may gradually become thicker.

If the infection is strong, the mucus may be yellowish or even green in colour. This is not necessarily a sign of severe illness. If your child’s nasal mucous is very thick, however, see a doctor.

What are the signs of a blocked nose in children?

A blocked nose in children is extremely common, particularly in little ones who are not yet able to blow their own nose.

Although not generally severe, this symptom is worth paying attention to if it persists for several days. Possible causes of a blocked nose in children include:

Poor nasal hygiene may be the cause of a blocked nose in children. Little ones tend to breathe exclusively through their noses. This means that proper cleaning is essential to get rid of any impurities.

A daily clean with a special nasal spray will help to reduce the risk of infectious illnesses such as colds and control allergic rhinitis. It also limits exposure to more severe infections.

Colds are common in young children. Although they are not dangerous, they can cause a blocked nose which can be very uncomfortable.

There are some conditions that can cause a blockage in the nasal cavity. This may be unilateral (in one nostril only) or bilateral (a blockage on both sides).

Little ones have lower defences against the common cold and influenza

What are the symptoms of a blocked nose in children?

When they persist, symptoms such as a blocked nose in children may be a cause for concern. A blocked nose is the reason for many visits to the GP, pediatrician or ear nose and throat specialist.

The shape of a child’s larynx makes it particularly vulnerable to respiratory difficulties. It is important to pay attention to this. The following symptoms could point to a nasal blockage and may require medical attention:

Practical advice for dealing with a blocked nose

We will now look at some of the ways that parents can prevent or deal with a blocked nose in children:

Dry air can aggravate a blocked nose in children. The easiest way of maintaining a humid environment is to use a vaporizer or humidifier. Both devices are designed to put moisture back into the air.

Use saline solution to clean their nose

Saline solution is the go-to remedy to naturally treat a blocked nose in children and remove mucus. It comes in the form of sprays, drops, atomizers or single-dose capsules.

Good hydration stops overproduction of mucus and makes it easier to expel. Give your child plenty of water. You can also supplement this with juice, milk or broth during the day to make sure that they are properly hydrated.

Prop the child’s head up to sleep

As a final tip, make sure that your child sleeps in a position where their head is higher than the rest of their body. This will help them to breathe more easily during the night, even with a blocked nose.

For babies and toddlers, try placing a small folded towel under their head. Some cribs can also be tilted to ensure that the child sleeps at a suitable angle. Keep in mind that a blocked nose can get worse when we lie down, and breathing can become more difficult.

A blocked nose is generally harmless and temporary. However, in some cases a blocked nose in children can lead to hearing difficulties.

These, in turn, are linked to speech delays. Follow the tips above to deal with colds and congestion effectively and avoid any future complications.