5 Diseases That Can Appear During Menopause

The diseases that can appear during menopause may reflect bad habits and a lack of medical check-ups. Know the most frequent ones and start taking care of yourself now. 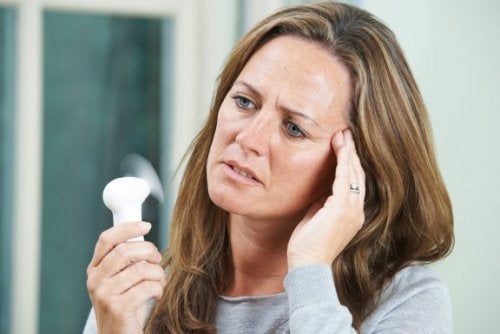 Menopause represents a phase in which women stop being fertile. It marks the end of all menstrual cycles. Each woman is different and experiences different symptoms. Certain diseases can also appear during menopause.

Discover what they include and look out for their symptoms in order to control them in the best way possible.

What is menopause and what are its symptoms?

Menopause is a life stage experienced by all women once they stop ovulating. As a consequence, menstruation also ceases.

Menopause is a long process in which women can experience a series of symptoms characterized by a lack of hormones.

It can appear on average around age 45 to 48 and lasts for about four years. In some women, it lasts for more or less time.

The most common symptoms of menopause include hot flashes, which occur in 45% of women in this stage of life. Other common symptoms include vaginal dryness and a decrease in libido.

5 diseases that can appear during menopause

A large percentage of women in menopause have reduced quality of life due to the symptoms they experience. In addition to these symptoms, certain diseases can appear during menopause.

Fluctuating and low hormone production can bring on the following diseases:

Estrogen helps control the level of fat in the body. It keeps metabolic disorders at bay. When estrogen production fails and the woman doesn’t have healthy lifestyle habits, she’ll experience an increase in triglycerides, blood pressure, cholesterol and blood sugar.

All of these signs determine cardiovascular health and also lead to diabetes. Therefore, specialists recommend that women acquire healthy lifestyle habits after the age of 35.

These include eating fruits and vegetables, exercising, not smoking and reducing the intake of alcoholic beverages.

Osteoporosis occurs alongside menopause with high incidence. This disease causes the bone structure to weaken. Fractures appear as a result.

Bones are living tissues that grow and cover the inside of the body. The lack of estrogen during menopause causes bone loss to occur more rapidly than bone construction. As this condition worsens, osteoporosis sets in.

This condition is due to an underactive thyroid. The thyroid is unable to produce thyroxine and triiodothyronine, hormones that regulate metabolism. This results in fatigue, depression, loss of memory and trouble losing weight.

“A large percentage of women in the menopause phase have a reduced quality of life due to the symptoms they experience.”

Menopause can also cause ophthalmologic problems. One such problem involves the curvature of the cornea, which diminishes visual acuity with age.

Similarly, dry eye syndrome is common. This condition is caused by a deficiency in the estrogen received by the conjunctiva and the cornea, which reduces the amount of fluid that lubricates the lacrimal.

With the reduced production of these hormones, the quality of the bone cartilage degenerates. In addition, collagen production also reduces at this time, which aggravates the condition.

To conclude, it’s important to note that menopause isn’t a disease. However, bad habits can lead you to experience diseases that can appear during menopause.

Start leading a healthy lifestyle now and reinvent yourself as a woman in this stage of life, without forgetting to regularly go to the doctor.