More and more genetically modified foods are making their way into shopping carts without people even noticing it. But what are their advantages and disadvantages? 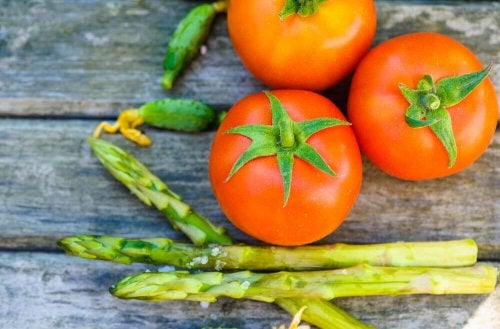 Genetically modified foods are becoming increasingly present in our lives. Simply strolling through the supermarket and getting close to the fruits and vegetables will make you realize a reality.

All the vegetables look like clones of themselves, as you can find tomatoes of the same exact red color, apples of the same size, and seedless watermelon, among many others. Can consuming them affect you?

What are genetically modified foods?

Although all these foods are very healthy, their origins can make you doubt their benefits. Genetically modified foods result from genetic modifications. These modifications incorporate genes from other organisms to get certain characteristics.

Currently, most of these altered characteristics are designed to increase the production of these foods:

Although all of these processes are highly controlled by the World Health Organization (WHO), which ensures that all these crops are as safe as conventional ones for both human and animal consumption, many people are against the human consumption of these foods.

The pros and cons of genetically modified foods

To be fair, humans have been selecting species for both human and livestock consumption since we abandoned nomadism. But, in this case, what biotechnology does is take these genetic selection processes a step further. What postures advocate for or against genetically modified foods?

The advantages of GM foods

The disadvantages of genetically modified foods

One of the biggest critics of GM foods is the Greenpeace organization, mainly due to the loss of biodiversity these foods pose. The problem isn’t so much their risks for human consumption (which haven’t been proven) but their use thereof.

But the production of genetically modified seeds, a business that moves millions every year, mostly produces sterile plants, which is why it’s necessary to purchase new batches every season.

Monsanto Company, a multinational producer of agricultural agrochemicals and biotechnology, is one of the most powerful companies in the sector. According to Greenpeace, it has a patent that covers all genetically modified soy products:

“If a farmer buys seeds resistant to a particular herbicide, they must also buy its herbicide or specific chemicals to activate the desired characteristics.”

Another factor is their negative environmental impact. This is because these techniques don’t favor sustainable agriculture nor the development of local models based on the use of fertile native varieties.

This opens a constitutional debate on the protection of traditional cultivation systems, which respect natural selection in seed production, and the control of global agriculture by a few companies.

To sum it all up

Ultimately, the controversy that surrounds genetically modified foods isn’t as focused on their safety. Instead, it’s mostly focused on economic aspects. What does seem to worry associations such as Greenpeace is, perhaps, those that control the wealth this new technology generates, which may expand the social gap in developing countries.

It’s true that any genetic alteration can have unpredictable consequences. This is why these products are subject to strict health checks.

“Children in Africa have no choice. As a society, we shouldn’t have the right to decide which foods are ‘bad or dangerous’ under the conditions global hunger is in.”

What Influences Babies’ Genetics?
If you're going to have a boy or girl, you might wonder what influences babies' genetics. We'll tell you all you need to know in this article. Read more »
Link copied!
Interesting Articles
Childhood psychology
The Children of Alcoholic Parents