Jellyfish Stings in Children: What You Need to Know

Jellyfish stings are common around the world and can affect anyone that visits the sea. Today, we'll tell you what you should and shouldn't do if your child falls victim to a jellyfish. 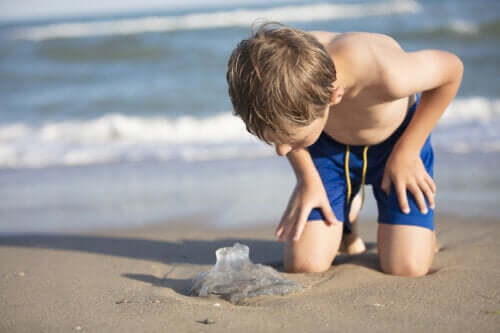 Whenever we take our children to the beach, we need to think about jellyfish stings. It’s common for children to fall victim to these animals since they’re naive about the damage they can do.

These stings can ruin even the best of beach days. So, with that in mind, we’ll tell you all you should know about jellyfish stings in children.

How do jellyfish sting?

Jellyfish are very primitive creatures that live in seas and oceans all around the world. There are various types of jellyfish that differ according to their morphological characteristics and the seriousness of their stings.

Jellyfish sting by means of their tentacles. Contrary to what you may think, these animals don’t pursue people or other prey for that matter. However, when they come into contact without skin, their tentacles release microscopic stingers that jab into the skin and begin to release venom.

The venom that these stingers release is hive-causing. In other words, they activate a strong immune response that produces wounds similar to hives. The resulting injuries are red and palpable since they’re raised above the surrounding skin. What’s more, they produce pain, burning, and itching.

Children may suffer more or less depending on their body’s immune response and the number of stings they receive. For example, in some cases, children may experience nausea, dizziness, vomiting, fever, and headache. However, in most cases, the symptoms are less severe and only include localized discomfort.

You may also want to read: What Are the Effects of Bug Bites and Stings in Children?

What to do in the case of jellyfish stings in children?

Most importantly, as always, you need to stay calm and try to calm your child down if they’re upset. In most cases, despite the pain, the situation isn’t serious. Next, you should wash the area and apply either saline or saltwater. That way, you’ll rinse off any possible remaining stinger and venom to keep them from entering the skin.

After this, you can apply a cold compress to the area to help calm the burning and itching. Just remember, when you apply the cold, make sure to place a plastic bag or any fabric between the ice and your child’s skin. In other words, don’t apply the ice directly to the wound.

If any remaining pieces of the animal are on your child’s skin, you’ll need to remove them. You can do this with the help of a tweezer or a piece of plastic, such as a credit card. You should never use your hands since the fish will once again feel under attack and release venom.

If you find yourself on a beach with amenities, you can seek the help of a lifeguard. On occasion, they may have topical pharmaceuticals that can help bring faster relief.

While uncommon, if you notice any alarming signs and symptoms in your child, then you should seek emergency medical services right away. The same is true if you notice the allergic reaction getting out of control. That way, medical professionals will be able to treat the reaction. In a small minority of cases, an anaphylactic reaction can occur.

What shouldn’t you do in the case of jellyfish stings in children?

There are certain popular beliefs regarding treatment and supposed remedies for jellyfish stings that can actually make the situations worse. Some of the mistakes that people make often make are the following:

Read more: Why Does My Child Always Get Bitten by Mosquitoes?

What you need to know about jellyfish stings…

Normally, mild cases of jellyfish stings in children will have no major consequences. However, the pain and discomfort of the moment can ruin the great time they’re having at the beach. Therefore, it’s important to act quickly and appropriately in order to relieve symptoms as best as possible.

What’s more, in the case of extreme reactions or alarming symptoms, you should seek emergency medical attention as soon as possible to obtain treatment and prevent complications.

How to Respond to Drowning in Children
Drowning is the second leading cause of death of children in developed countries. Today, we'll tell you how you should respond to drowning. Read more »
Link copied!
Interesting Articles
Bumps and bruises
Bumps to Baby Teeth: What to Do

Bumps and bruises
What Is Toddler's Fracture and How Can You Treat It?

Toddler's fracture can be quite common in children who are learning to walk. Although it isn't very serious, it can…

Bumps and bruises
Antiseptics and Disinfectants for Children's Wounds