What Is Toddler's Fracture and How Can You Treat It?

Toddler's fracture is quite common when babies start to walk. We'll tell you everything you need to know about it in today's article. 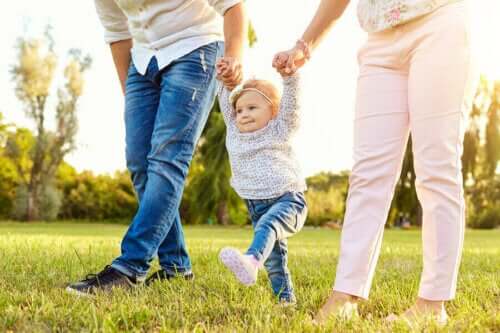 Toddler’s fracture can be quite common in children who are learning to walk. Although it isn’t very serious, it can have both physical and mental consequences for children. We’ll tell you everything you need to know about this type of fracture below, so keep reading!

What is toddler’s fracture?

Toddler’s fracture is also known as Childhood Accidental Spiral Tibial (CAST). What happens is that when a child starts taking his or her first steps, they suffer many falls and bumps, albeit minor ones. However, the leg bones still aren’t strong enough and aren’t used to carrying weight.

This is why toddler’s fracture sometimes occurs, which is a fracture of the tibia, one of the main leg bones. In this case, it’s a non-displaced fracture, which means that the bone breaks but doesn’t move from its original position.

Not surprisingly, as you’ll have guessed from its name, this type of fracture usually affects children between 9 months and 3 years of age – children of early walking age.

You may be interested: Walkers, Enemies of Babies First Steps?

Because of the age at which it occurs, children still don’t know exactly what’s happening to them or what’s hurting. For this reason, the most common symptom here is that they refuse to walk.

The children notice that it hurts to walk, and so they avoid putting pressure on their feet. In many cases, there’s localized pain when you touch their lower leg, near the ankle.

They may also develop a limp to avoid the pain of putting pressure on the injured leg. This limp usually comes on suddenly. Keep in mind that very often we don’t even remember that the child has had a fall or hurt themselves, and so it’s hard to tell what’s happening.

How is a toddler’s fracture diagnosed?

A specialist is responsible for making the diagnosis. This will be based on the outward manifestations, how the process has occurred, and a good physical examination. In addition to this, some imaging tests will be necessary. An ultrasound may be carried out, but the test that will help the doctor make a correct diagnosis will be an x-ray of the child’s leg.

You may be interested in: When Do Babies Take Their First Steps?

What is the treatment?

Once the doctor has taken an x-ray and made a diagnosis, the child will have to wear a leg brace to immobilize their leg. After 10 days, they’ll take another x-ray. If it really is a toddler’s fracture, then the x-ray taken after 10 days will show what we know as a callus in the area of the fracture.

This is a sign that the fracture is healing. So, once this type of fracture has been confirmed and doctors can see that it’s healing, then the leg brace will be kept on for two more weeks.

What else should you know about toddler’s fracture?

Because of a child’s normal growth and development, it’s quite common for this type of fracture to occur. However, if you watch out for the symptoms that we’ve mentioned, and take your child to the specialist promptly, then its treatment is simple. Normally, these fractures heal well and the child won’t suffer any physical sequelae after the bone has healed correctly.

However, we also need to take into account that there aren’t only physical consequences. In these cases, young children won’t be able to reason like an adult. It’s quite possible that, after suffering a fracture like this, some of them may be scared to continue learning to walk.

In these cases, you’ll need plenty of patience. You should try to explain to them, as far as possible, what has happened and try to support them. Include them in your reasoning of why they should keep trying to walk, but don’t force them in any way.

We hope this article has been useful to you, and we wish you the very best as your child takes their first steps!

The Walking Reflex in Babies
The walking reflex is an instinctive behavior indicative of the adequate development of babies during their first year of life. Read more »
Link copied!
Interesting Articles
Bumps and bruises
Antiseptics and Disinfectants for Children's Wounds