How to Avoid Ear Infections in Babies

If your baby won't stop crying, the reason may be an ear infection. Specialists say that over 80% of children will have an ear infection in the first two years of life. Here are a few tips to reduce the risk. 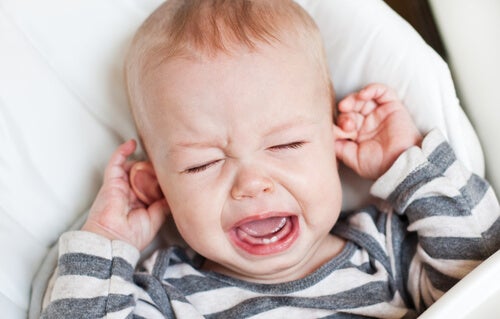 Ear infections are extremely common in early childhood. In this article, we’ll take a look at some basic precautions to avoid ear infections in babies.

Earaches are probably one of the most acute and painful sensations in the human body. It is also the main symptom of otitis, otherwise known as an ear infection.

What is an ear infection?

First of all, we should clarify that otitis refers to an infection caused by microorganisms in any part of the ear. This causes inflammation, which leads to intense pain.

There are two kinds of otitis:

The most obvious symptom is earache. This can be accompanied by blocked ears, itching or even oozing earwax.

Other symptoms that may occur are:

In general, ear infections are a minor illness that can be cured completely without any lasting consequences.

Common treatments include antibiotics and anti-inflammatory medication. These should only be bought and used under prescription from a healthcare professional.

The most obvious symptom is earache. This can be accompanied by blocked ears, itching or even oozing earwax.

In extreme cases, ear infections and inflammations can cause lasting effects. The least severe of these may be a chronic infection or inflammation that keeps coming back.

Ear infections in early childhood can also make children more prone to sensorineural hearing loss later on in life. The likelihood of this depends on how badly the mucous membranes and ossicles are affected, and whether the ear drum has been perforated.

As mentioned above, otitis is extremely common in babies. According to the Spanish Association of Pediatrics, between 80% and 90% of children will suffer from an ear infection during their first two years of life.

These tips may help to avoid a painful and uncomfortable ear infection:

Although less important than the advice above, these preventative measures may also help to prevent ear infections:

Unfortunately, there is no failsafe way to protect your child against ear infections. Make sure to pay attention to the symptoms of otitis so you’ll be able to take action as soon as possible.

If an ear infection is uncomfortable for adults, who can talk about the pain and take medication to control it, just imagine how intense and painful it can be for a baby, who has no way to express what they’re feeling.

With all this in mind, keep a watchful eye on your baby. By keeping all of the tips above in mind, you’ll be able to reduce the risk of this common and unpleasant childhood illness.