How to Act when Faced with A Wasp Sting 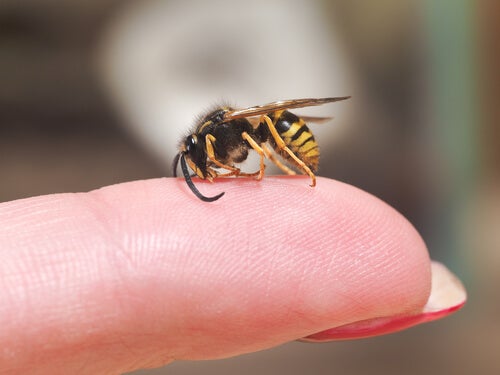 Although a wasp sting can cause panic, it’s important to be calm and act properly when it comes to dealing with this common occurrence.

Many parents have already experience at least one wasp sting in their lifetime. Although they are usually not serious, they can be very painful.

Although a wasp sting isn’t particularly dangerous, it’s important to know how to act when faced with one personally or when it has to do with our children.

After reading this article, you’ll be able to discover how to give first aid to a wasp sting. You’ll also understand under which circumstances this insect bite can be life threatening.

Symptoms of a wasp sting

A wasp sting is a common occurrence in many parts of the world. They can be very painful and uncomfortable.

The symptoms that a wasp sting can bring depends a lot on the species of wasps that live in your geographical location.

Here are the common symptoms of wasp stings:

Except for the swelling and the slight burning that may remain several days after the sting, the symptoms are usually mild and then diminish after a few hours.

In most cases, the treatment of a wasp sting consists of cleaning the area and preventing infections.

If you notice any of these symptoms consult your doctor immediately:

Considerations when it comes to wasp stings

Before describing the necessary first aid, it’s important to distinguish that wasp stings are different from bee stings.

The two insects have different forms, ecosystems, food and stings. Unlike bees which die after their stinger gets stuck in the skin, wasps can sting multiple times.

A wasp’s stinger is part of its reproductive system and it’s most resistant. This allows a wasp to sting several times without dying.

Why is this information important? This knowledge is important in order to understand two vital elements.

This first is that you have to pay attention to the wasp after the sting since it doesn’t die. The second is: don’t misinterpret the absence of the stinger as an indicator that it’s lodged in the swelling.

Looking for a non-existent stinger in the swelling will only hurt the skin even more.

The following tips are useful for different types of bites:

Respiratory emergencies after a wasp sting

Allergies and other conditions can aggravate the symptoms of wasp stings. Asthma is an example of a case where a sting can have a fatal outcome if an ambulance isn’t immediately called.

There are also conditions in which blood pressure drops or the heart rate rises too much after a wasp sting.

These severe responses to a wasp sting are usually due to an inflammatory response that the body produces after a sting. This inflammation can result in airway obstruction and that’s why it’s important to act quickly when faced with difficulty breathing.