Premature babies can have many different health problems. Here are some of the most common digestive problems in premature babies. 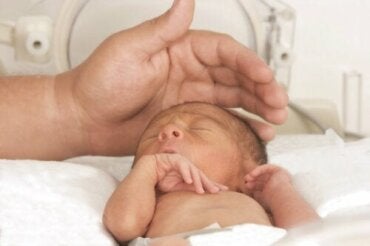 Premature babies, because they’re still not fully developed, are more likely to have certain health problems at birth. Although some of them don’t carry too many risks, thanks to scientific advances, it’s still a concern, and their correct diagnosis and treatment are of utmost importance. In this article we’re going to focus on the most common digestive problems in premature babies.

Gastroesophageal reflux is when the contents of the stomach return to the esophagus after the baby has some food. In the case of premature babies or some newborns, it occurs due to an underdeveloped gastroesophageal sphincter.

This is a muscle that’s responsible for generating downward pressure in the area where the esophagus meets the stomach. When it’s working correctly, it ensures that, once the food has passed to the stomach, it can’t ascend again.

Babies’ reflux is often in the form of mouthfuls of milk that they’ve ingested. They may vomit it out, or even bring it up and then swallow it again without us noticing. In some cases, this may cause the baby to be momentarily out of breath. They can be deprived of oxygen and their lips can become a little blue from the lack of oxygen.

Gastroesophageal reflux is usually diagnosed by the clinic taking into account the baby’s symptoms, and no further tests are usually needed. If there aren’t any further complications, then medication isn’t necessary. The doctor will recommend other measures to try to alleviate the problem.

This could be a recommendation that the baby eats and then stays in bed for a while after meals, or that the baby takes more frequent feedings, but in smaller amounts. If these measures don’t help, then the doctor may start treatment with anti-reflux drugs.

More information here: How to Provide the Right Nutrition for Premature Babies

Meconium is the newborn’s first poop. It’s made up of mucus, bile, and the dead cells that line the wall of the baby’s stomach and intestines. The baby usually expels the meconium in the first few hours of life.

Meconium ileus is a condition where the baby hasn’t expelled meconium within a few hours of the baby’s birth. This is caused by the thicker amount of this meconium blocking the intestine, not allowing it to be expelled.

Therefore, the doctor will diagnose this condition when the baby hasn’t expelled their first stools in the first few hours after birth.

Meconium ileus may appear in isolation or it may be a symptom of more serious diseases, such as cystic fibrosis. This is why, in most cases where a baby has meconium ileus, doctors will perform other tests, such as abdominal X-rays. They’ll do this to rule out other associated diseases or malformations in the intestine that prevent the expulsion of meconium.

Once they’ve established the diagnosis and examined its relationship with other possible diseases, they’ll need to treat it.

To do this, doctors will stimulate the area of the anus first. If this doesn’t get the baby to expel it, then enemas or very fine probes can also be used, which are introduced through the baby’s anus and try to remove the blockage. Finally, if this isn’t enough either, then they’ll have to operate on the baby and remove meconium.

Also, because of the immaturity and underdevelopment of the baby’s intestines, the little ones are more susceptible to certain damage and infections.

Necrotizing enterocolitis is the inflammation of the walls of the baby’s intestines. This can occur due to malformations in the intestines or infection by certain microorganisms such as viruses and bacteria.

What happens with these inflamed walls is that they’re very sensitive, and can even become perforated or no longer viable due to lack of oxygen. In this case, the symptoms are variable and depend on the severity of the inflammation.

These can range from a refusal to eat, to vomiting or swelling of the abdomen. In more severe cases, the baby may expel bloody stools, and it could even affect their general condition, making the baby more irritable or sleepy.

The diagnosis will be made based on the baby’s symptoms. In addition, lab and imaging tests, such as X-rays, are usually performed to check the condition of the intestine. Treatment will start with a total diet. By helping the intestine to rest, it should then regenerate and improve. In complicated cases, it may be necessary to operate on the baby to fix the bowel.

Find out more: Questions and Answers About Premature Babies

Apart from digestive problems in premature babies, it’s common for them to have all sorts of health problems. That’s why, when a premature baby is born, they will need to be observed and monitored longer than a baby who is born fully developed.

Usually, when a premature baby is born, the parents will be instructed on what situations they should be most alert to and told how to act quickly to avoid complications.

5 Must-Have Items for Your Premature Baby
The best thing to do when your premature baby arrives is to equip yourself with the items your family needs to overcome the demands of this situation. Read more »
Link copied! Next
Interesting Articles
Illnesses in babies
Eczema in Babies: Characteristics and Treatment