The Benefits of Physical Therapy for Infant Colic 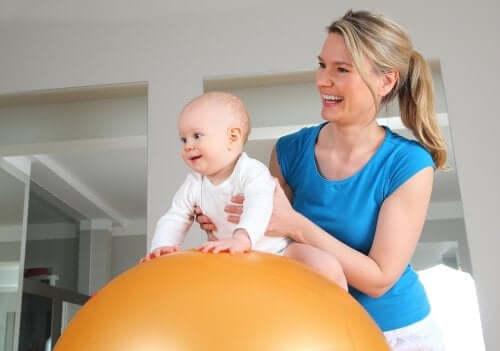 Infant colic is a common newborn condition that occurs during the first few months of life, often associated with breastfeeding. It tends to be a major concern for parents who don’t know how to deal with it. Hence the importance of knowing about therapies that can help us, such as physical therapy for infant colic.

As we’ve said, infant colic appears quite frequently in the lives of newborns and their families. It’s a benign disorder characterized by uncomfortable crying that usually occurs in the evening. Babies become agitated and often have abdominal distension due to gas accumulation in the gastrointestinal tract.

These crying episodes usually last about three hours a day and usually occur more than three times a week for more than three weeks. They involve excessive muscle tension that generates distress and stress, both for babies and their parents and caregivers.

Often, infant colic is a traumatic experience for parents and family members who bring their concerns to the pediatrician’s office. Although studies have looked into many hypotheses, it’s still not clear what the real cause of infant colic is.

Some possible causes that have been studied are of gastrointestinal origin:

One of the problems when dealing with this disorder is precisely the multi-causality and the differences that occur in each child and family. The same symptoms don’t appear in all cases, nor do the same measures work. Even so, it’s important to know the main interventions that are currently available. Among them, we find the following:

Several studies show that massaging the abdominal area reduces infant crying and improves sleep. At the same time, it helps calm parental concerns. However, there’s no scientific evidence that these abdominal manipulation therapies cause changes in the infant’s digestive system.

Just the same, the benefits of massage in babies not only have positive effects in the treatment of infant colic; they’re actually beneficial in many other ways, such as:

Physiotherapy, apart from ruling out more important intestinal pathologies, is an effective aid when locating and treating areas of special accumulated tension in babies. Often, the areas of the neck and pelvis accumulate excess tension caused, for example, by difficulties in childbirth or pregnancy.


It’s precisely these areas that have a great influence on the proper functioning of the digestive system, due to the presence of important nerves. The relaxation of these tensions helps to improve the digestive process and also breathing and mobility.

In conclusion, infant colic is a common disorder in the first six months of a child’s life. While it’s a benign condition, it causes great concern in parents. Therefore, there’s great interest in possible therapeutic alternatives to help cope with it and reduce it.

With this in mind, physical therapy for infant colic appears as an effective and safe alternative that also presents multiple advantages and associated benefits.

The Benefits of the Kangaroo Method in Infants
The Kangaroo Method is a technique for caring for newborns. It's based on skin contact between the mother and the newborn baby. Read more »
Link copied!
Interesting Articles
Illnesses in babies
Neonatal Sepsis: Causes and Effects

Illnesses in babies
Learn All About Neonatal Hypoglycemia

Neonatal hypoglycemia is a condition characterized by a drop in blood sugar levels. The amount of glucose is below 50…