Do Children Grow When They Have a Fever?

Do children grow when they have a fever? Or is it just an old wive's tale? In today's article, we'll let you know if there's any truth to this popular belief. 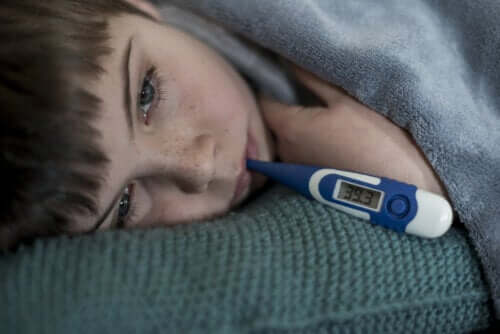 From generation to generation, grandparents have long held the belief that children grow when they have a fever… as if it were a sign of a growth spurt. Despite the longevity of this theory, is there actually any truth to it? Is it fact or fiction? We’ll tell you all you need to know about this popular belief.

Sleeping and proper rest are important elements that we all need, especially when it comes to children. Studies have shown that not getting enough sleep can lead to alterations in a child’s development and other consequences.

Sleep consists of different phases that make up cycles that repeat throughout the night. Each cycle lasts approximately 90 minutes. The correct completion of these cycles is important for a child’s proper physical and mental development.

What’s more, sleep is directly related to growth. This is because, during sleep, children’s bodies produce a high concentration of the growth hormone.

You may also want to read: Fever Accompanied by Drowsiness in Children

What is the growth hormone?

The growth hormone is released by the hypophysis – also known as the pituitary gland. This is a small part of the brain that’s responsible for the production of different hormones.

Our bodies don’t just produce the growth hormone during childhood but throughout our entire lives. It’s responsible for regulating growth after birth and metabolism. Below are some of its functions:

A lack of this hormone in children produces, principally, shorter stature and a delay in sexual maturity.

What occurs when children have a fever? Do they grow?

It appears that there are two reasons behind the popular belief that children experience growth spurts when they have a fever:

Both factors cause the body to produce a greater amount of the growth hormone in these stages. But does that mean that children who have fevers more often will become taller than those who hardly get sick? Absolutely not.

A child’s height depends on many factors, such as genetics, nutrition, and the environment… But a child won’t become taller just from sleeping more hours or having a fever more often.

You may also want to read: How to Naturally Check for a Fever in Children

It’s very important for children to get enough rest. The right amount of rest will help our little ones to develop correctly, both intellectually and physically.

At the same time, we’ve come to the conclusion that many times, sayings and popular beliefs do actually have a physiological explanation. But that doesn’t mean they’re always 100% accurate.

Rather than believing everything you hear, look for a true and trustworthy explanation… especially when it comes to your child’s health.

Is Maternal Instinct a Myth or Reality?
Maternal instinct refers to the relationship that exists between a mother and a child that unites them in a special way. But is maternal instinct a myth? Read more »
Link copied!
Interesting Articles
Illnesses in children
Allergies to Bites and Stings in Infants and Children