Cases of rickets due to vitamin D deficiency have greatly reduced thanks to prevention campaigns, at the least in developed countries. Read on to learn more about this condition! 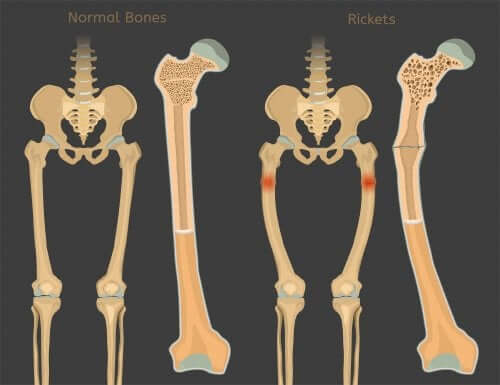 Rickets is a disease that’s primarily caused by a vitamin D deficiency in children. This disease is very common in underdeveloped countries or developing countries.

It’s characterized by growth retardation and bone deformities. This condition is most common in children between six months and three years of age, as this is the fastest stage of growth.

Rickets is a disorder of the mineralization of bone and cartilage that’s still growing. Therefore, this disease only occurs in children. In the case of an alteration of mature bones, we’re talking about a different disorder, such as osteomalacia.

The process of bone mineralization depends on a balance between calcium and phosphorus, and this homeostasis is regulated by vitamin D. 99% of body calcium is found in the bones. When calcium levels decrease, parathyroid hormone levels increase. In turn, this causes a decrease in phosphorus levels.

These are the main symptoms of this disorder:

As we mentioned above, the most common cause of this condition is vitamin D deficiency. However, other factors can also trigger the onset of this disorder. Genetic and metabolic causes are among them.

Vitamin D is a fat-soluble vitamin that’s essential for calcium absorption. When you have a vitamin D deficiency, your body can’t absorb the intestinal calcium that comes from food. The same goes for phosphorus.

Thus, the blood levels of these minerals decrease and the body tries to restore them by extracting them from bones. Therefore, the bones become soft and easily deformed.

Since this disease became known and widely studied, rickets cases caused by vitamin D deficiency have decreased a lot, at the least in developed countries. This is thanks to prevention campaigns and the systematic administration of said vitamin to all children.

However, you can also get vitamin D through your diet, especially by consuming certain fish. In this regard, the human body can even synthesize it on the skin thanks to solar radiation.

Diagnosis and treatment of rickets

The diagnosis of this condition is based on the combination of altered analytical and radiographic findings and the presence of the typical clinical symptoms we explained above.

Blood tests can detect low levels of phosphorus and calcium, as well as of the alkaline phosphatase enzyme or vitamin D.

In general, the treatment consists of administering calciferol orally. However, this isn’t effective in some cases of rickets, such as those generally caused by low phosphorus levels due to its removal through the kidneys.

As a preventive measure, approximately 400 IU of vitamin D is currently administered daily to all children from birth to age two. You can also get vitamin D through sun exposure.

Rickets is a bone disorder mainly caused by a vitamin D deficiency in children. This condition can be prevented with an adequate vitamin D intake, as well as controlled sun exposure.

The Importance Of Vitamin D
Your baby is constantly growing, both physically and cognitively. That is why today we have decided to share with you the importance of Vitamin D when it comes to a child’s growth. Read more »
Link copied!
Interesting Articles
Illnesses in children
Erythema Nodosum in Children: Symptoms, Causes and Treatment