It is essential to diagnose and treat breast conditions in a timely manner. Therefore, knowing the main anomalies and conditions can be a huge help to identify them if necessary. 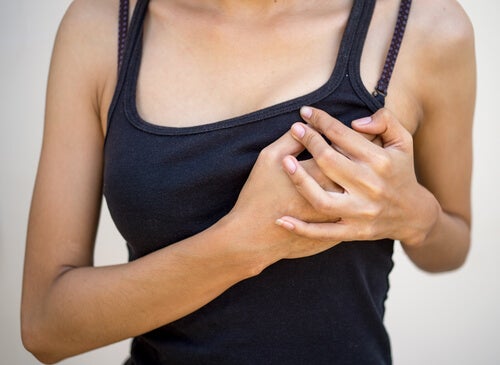 Today we’ll provide information on the main non-cancerous breast conditions, teach you how to detect them and give you their possible treatments.

Breasts go through changes in the different stages of a woman’s life and fulfill the function of feeding their children. This establishes a bond that is beyond compare. However, breasts also demand care and face certain health risks.

It’s important to first note that most breast conditions are benign, meaning they aren’t cancerous. However, you should not lower your guard in terms of performing the relevant controls to detect any anomaly related to breast cancer.

According to the American Society Against Cancer, these are the most common benign conditions:

Mastitis is a breast inflammation usually caused by an infection. It occurs both in lactating women (most of the time) and non-lactating women. It is usually treated with antibiotics.

Many breast lumps are caused by changes in the breast tissue, especially when you’re most fertile. They are detected by inflammation or hypersensitivity. They usually disappear over time, although the fluid can be removed with a needle or by surgery if it reappears or if it causes painful symptoms.

3. Adenosis of the Breast

It is the presence of more milk-producing glands (lobules) than normal and they are larger. It usually causes pain and disappears after a while. However, a professional follow-up is recommended.

It occurs when adipose tissue is damaged. It can occur after surgery or treatment with radiation in the breast. The oily cyst is a bag of fatty fluid that forms instead of healing a wound.

There may be bumps and redness, but they don’t cause pain. They’re usually not treated, but a biopsy may be needed to make sure they don’t contain cancer cells.

5. Fibroadenomas of the Breast

They are non-cancerous tumors composed of glandular tissue and connective tissue. They are common between 20 and 40 years old and feel as if you had a marble inside your breast.

Some are easy to feel and others are detected through a mammogram or ultrasound. If they don’t grow and the doctors are sure they’re not the product of another condition, they’re left until they disappear. Otherwise, or preventively, they’re removed.

This is an overgrowth of the cells that line the ducts or the mammary glands. It doesn’t generate protuberances and is detected through mammograms or biopsies.

Unlike the above, the atypical hyperplasia (one type in which the cells are more distorted) increases the likelihood of breast cancer. If there is a risk, you should remove the surrounding tissue.

This is also called lobular neoplasia. It’s the growth of cancer cells in the milk-producing glands, but without crossing the lobules. It doesn’t cause inflammation or pain, so it’s detected by having a biopsy done by some other problem in the breast. This condition also increases the risk of breast cancer.

They are benign tumors similar to warts that grow in the milk ducts. They can be solitary (cause liquid secretion) or multiple. You can detect them with mammograms or ultrasounds.

If they’re large, your doctor will do a biopsy. By themselves, they don’t increase the risk of cancer, but they do if they’re followed by another condition, such as atypical hyperplasia.

How to Reduce the Risks of Breast Diseases

To reduce the possibility of suffering from any of these breast conditions, the AECC recommends following the following tips:

As a final recommendation, don’t be afraid to take the exams when necessary. In addition to being painless, they’re the key to proper treatment of any breast conditions that may be found.

“The only thing we have to fear is fear itself. So the only thing you should be afraid of is not going to get your mammograms.”

Remember that it’s useless to sit idly by and not do anything. If you have any questions or concerns, consult your doctor without waiting another minute.