Migraines During Adolescence: A Sensitive Problem 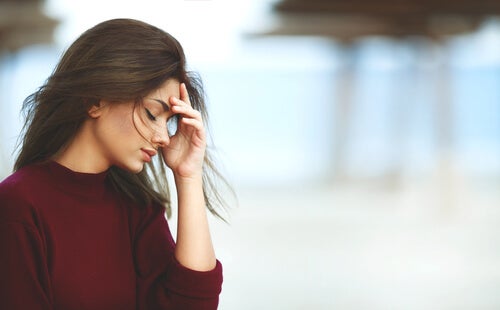 In this article, we’ll share with you the most common causes and treatment methods for migraines during adolescence.

Most of the times, headaches are temporary and we don’t pay a lot of attention to them. There are times however, when headaches can become more persistent and unbearable. Therefore, the topic of migraines during adolescence deserves to be treated with care.

Migraines are recurrent and intense headaches. They’re usually related to vascular disorders of the brain.

Migraines feel like headaches but with increased pressure on the nerves, blood vessels, neck and shoulders. According to experts, headaches are the most prevalent neurological disorders during the pediatric age which includes adolescence.

Dr. Charles Wibblesman, a member of the American Academy of Pediatrics, says that many of these headaches are due to the pressures of adolescent life such as stress caused by school, sports, family and friends.

Some experts believe that this condition can be inherited, since 50% of those who suffer from it have relatives who also suffer or suffered from migraines. The most accepted patho-physiological explanation is neurogenic inflammation due to the activation of the trigeminovascular system.

How to recognize migraines

Migraines are characterized by their sudden onset. They can also be accompanied by the following symptoms:

“Migraines are more intense and recurrent than regular headaches.”

Causes of migraines during adolescence

While the exact triggers of migraines are still unknown and under study, there are certain factors that can influence the onset of migraines such as:

The treatment of migraines during adolescence

First of all, it’s important to clarify that this condition is not easily diagnosable. In fact, it can take months to detect migraines. Specialists only consider it to be “probable” after ruling out other pathologies.

Once the diagnosis has been made, one of the most effective ways to alleviate the initial phase of symptoms is with rest and the use of medication. Doctors usually recommend analgesics, anti-inflammatory’s, anti-emetics, ergotamine and triptans.

“Migraines aren’t easy to detect; in some cases, it can take months to diagnose the condition.”

Non-pharmacological prevention consists of correcting eating habits such as incorporating nutrients that may be lacking such as certain vitamins. There are also physical treatment methods such as massages, acupuncture and yoga.

Other methods can be used to promote relaxation and proper posture. Some doctors recommend psychological treatment through hypnotherapy or psychotherapy.

People who suffered from migraines during adolescence recommend keeping track of the date of appearance of symptoms, duration and possible triggers. When it comes to women, it’s important to keep track of the start date of menstruation cycles in order for doctors to have more information and establish possible connections.