A Closer Look at Momnesia: What Is It?

Some experts point out that "momnesia" is only a myth and that memory problems in mothers are directly related to other factors, such as lack of sleep. However, it's a topic that more people are interested in every day. 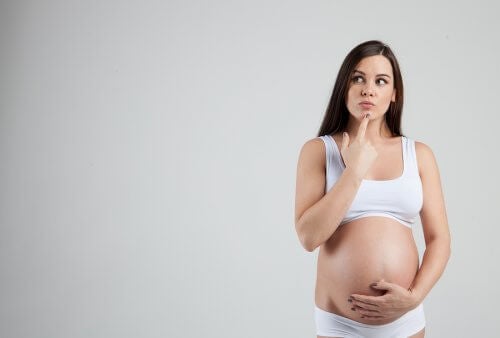 During pregnancy or after birth, many mothers claim to suffer from lack of memory and concentration and coordination problems. They also mention that they have difficulty thinking, remembering things, and even making decisions. This temporary brain condition is termed “momnesia.”

“Momnesia” is described as memory problems that a mother suffers during pregnancy and after the birth of the baby. Other problems are also noted, such as lack of concentration and learning problems. However, many question its existence. Is “momnesia” myth or reality?

During the gestation stage and after the birth of the baby, José R. Alonso affirms that the mother’s brain undergoes various structural and functional changes. However, these changes are mostly positive and include improvement in mental skills such as learning and memory.

According to the data collected by Alonso in an investigation, lack of sleep could be a mother’s determinant if she suffers from memory and concentration problems. If she doesn’t get enough sleep, the brain doesn’t rest either.

Another fundamental factor could be that her priorities are changing as a result of the arrival of a new baby. New tasks and challenges arise that require more focus and are of higher importance compared to other tasks.

What does the research say about momnesia?

In 1997, Anita Holdcroft, professor emeritus of anesthesia at Imperial College in London, conducted research that revealed that a woman’s brain decreases in volume by 7% at the end of a pregnancy. It took half a year until the brain recovered its normal volume.

After delivery, some brain areas increased in size: prefrontal cortex (reasoning and judgment), amygdala and hypothalamus (the regulation of emotions), insula, superior temporal gyrus and thalamus (empathy and recognition of emotions), and dark matter (learning).

Anita Holdcroft thought that these alterations were due to a change in the volume of the cells rather than in their number. In fact, during the gestation stage, the cerebral ventricles increased in volume. They returned to their normal state six months after the birth of the baby.

“One of the areas of the brain that undergoes the most changes is the medial preoptic area, which has been associated with maternal behavior.”

What activities can you do to improve memory?

When you have a baby at home, responsibilities tend to increase. Many times, they’re difficult to organize. Therefore, finding a quick solution to memory problems is often difficult. However, you can perform certain activities that will help the brain rest.

This is easier said than done, and more so when you have to take care of a newborn. Take advantage of the moments when you have a little help from the father or other relatives and get some sleep. When you do so, the brain rests and stress decreases.

A new baby becomes your center of attention and concern. In spite of this, if you have someone in the house who can help with the baby, delegate some tasks to them.

A diet that is rich in nutrients is healthy for both the body and the mind. Experts recommend eating fruits and vegetables that are composed of various vitamins and minerals.

Physical exercise is crucial for a person’s well-being. A simple walk through nature could help oxygenate the brain and keep you healthier.

In the same way, doing other exercises could contribute to your health and your brain’s health. Consult a specialist to obtain approval before performing any type of exercise.

In conclusion, “momnesia” could be a myth to some specialists, who emphasize that there are many factors that affect a mother’s memory or concentration. Even so, many changes occur in women’s brains during this stage. Those changes are mostly positive.

Episodic Memory: When does your child start to create memories?
Very few people have clear memories of things that happened when they were only a few months old. Memories from our first years of life are hard to come by. Read more »
Link copied!
Interesting Articles
Exercise for children
The Importance of Encouraging Children to Be Active