How to Prevent Your Teenager From Drinking Alcohol

Interest in approaching alcohol can be a response to different causes. Some teens feel that drinking makes them more friendly, uninhibited and gives them energy. However, it's a problem that parents must deal with intelligently. 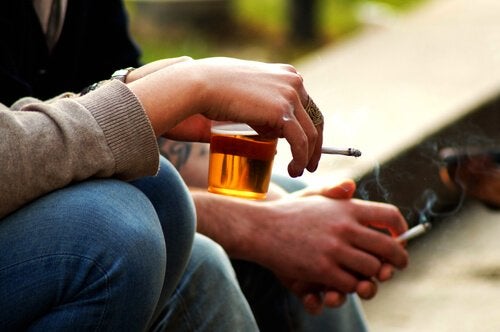 Today, alcohol consumption is promoted all around, and young people can ingest four or five alcoholic beverages within just two hours. Some even get drunk two to four times a month, which is why parents often ask: “How can you prevent your teenager from drinking alcohol?”

Faced with the risks of binge drinking and other habits, it’s important to know how to help prevent your teenager from drinking alcohol. The first recommendation is to stay calm.

Parents should treat this issue with their children and, ultimately, with the help of specialists – of course, not while they’re under the effects of alcohol.

If our teenager arrives home drunk, we must ensure his or her safety and wait for the hangover to pass. Afterward, without reprimands or threats of punishment, we must have a conversation.

Faced with the question of how to prevent your teenager from drinking alcohol, experts suggest coming up with possible solutions during the different stages of the intake – that is, before, during and after consuming alcohol.

As a preventative measure, parents must provide their children with relevant information about the adverse effects that consuming alcohol has on their bodies. They can also establish norms and models straying from conflicting consumption.

In the midst of the problem, communication and tolerance are fundamental. Parents should know whether their adolescent drinks sporadically or if, on the contrary, has made a habit of it.

What do they consume, in what quantities, where and with whom do they do it? All this is valuable information that only young people can offer. Continuous conversations will favor trustful environments, respect, and compromise.

Even if they adopt a pattern of consumption, the parents should act on time and accordingly. To help your children lead healthy lives, you should get to know them well and know how to identify their friends.

We must be watchful of the activities and the environments that our children are involved in. In this sense, alliances with other parents under the same conditions are valuable tools.

Regardless of the cause of the drunkenness, be it inexperience or addiction to the effects of alcohol, parents must attend to the warning signs.

If children’s concentration and reflexes decrease, or if they lose interest in their hobbies, spend more money than usual or increase the frequency at which they go out, there may be problems. It’s necessary to be aware of and know how to prevent this.

Perhaps the teenager’s classmates have gained respect for participating in drinking, and he intends to achieve the same. Or maybe he wants to copy the behavior of a family member or someone he admires. His approach to alcohol can be a response to different reasons.

Some teens feel that drinking makes them more friendly, uninhibited and powerful. Others use it as an escape from emotional or personal problems.

Although they won’t typically allow themselves to be to seen with a bottle in their hand, they’ll have symptoms of bad character, a lack of interest and bad humor.

You don’t have to blindfold your eyes. Parents must recognize and accept when their children are drinking. Only then can you help them. Alcohol and its symptoms are easily detected.

How to prevent your teenager from drinking

Acting brusquely won’t prevent your teenager from drinking alcohol. On the contrary, it can create a state of isolation and a lack of communication. This will cause the teen to refuse to share any details of his personal life, and will look for ways to drink secretly.

Adolescents should be made aware of the harmful effects that alcohol and other drugs can have on their health, especially in the central nervous system. The enjoyment of a few hours of entertainment can end in minutes with your life or organ failure.

Also, contrary to what many people think, drinking alcohol doesn’t solve their problems: it only prolongs them over time.

Risk factors that must be reviewed

Parents with teenage children should be aware of individual risk factors. Among them are the lack of information about alcohol and its consequences, high and frequent consumption of alcohol at home, the absence of rules at home, and the lack of respect among family members.

When alcohol is involved, impulsive traits, frustrations, low self-esteem and the absence of critical thinking arise. All are aspects that parents shouldn’t overlook.

Worrying isn’t the solution either – it’s necessary to take action after posing the dreaded question of how to prevent your teenager from drinking alcohol.