The Psychological Consequences of Excess Weight in Children

Overweight children suffer from low self-esteem, social isolation, and even depression. In this article, discover the psychological consequences of excess weight in children. 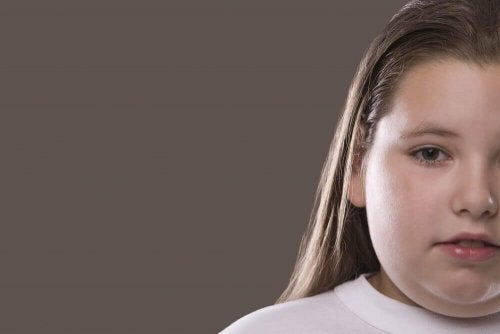 Nowadays, children are becoming aware of their body image at younger ages. Social pressure and concern for body image have an impact on children’s psyche. By the age of six, when they begin formal education, they’ve already internalized social standards and the idea that “being fat is bad.”

Discrimination due to excess weight

Unlike the physical consequences of excess weight, the psychological consequences are closely related to discrimination and social rejection. Overweight children lack one of the qualities society values the most: thinness.

Thus, they suffer the stigma of being different, singled out, criticized, and even blamed for their condition. In fact, it’s common for these children to have to endure harsh comments every day that brand them as gluttons and lazy. It’s easy to imagine the huge impact these experiences can have on a person.

Studies have shown the influence of excess weight on the personality of the children who suffer from it. These children are more dependent, overprotected, and submissive.

They’re also more likely to be prudent, impressionable, and not very expressive. On the other hand, children with a healthy weight are usually more independent, stubborn, and enthusiastic.

Obviously, the effect of excess weight in personality is mediated by other factors, such as family and social environment. However, it poses an important risk factor.

For better or worse, overweight children are very aware that their bodies aren’t socially desirable or acceptable. Thus, they generally consider themselves inferior and tend to harshly compare themselves to others and judge themselves.

In addition, comparison and judgment aren’t limited to their weight. Instead, they develop a tendency to focus their attention on their negative qualities and overlook their virtues. Thus, they build a poor self-concept that will accompany them during their growth and affect all areas of their lives.

Due to their low self-esteem, these children feel insecure in social interactions. They may tend to isolate themselves out of fear of rejection or being put to shame. Likewise, they may not want to participate in group or sports activities or may even be reluctant to go to school.

In addition to this, they may be victims of discrimination and abuse by their peers. As we mentioned above, children quickly absorb stereotypes and some of them won’t hesitate to attack and displace their peers who don’t meet aesthetic standards.

Depression due to excess weight in children

A negative self-concept, along with social isolation, may lead children to extreme situations. We all need to experience the feeling of belonging, establish good bonds with others, and enjoy a positive recognition by the environment.

When the situation draws on, the child may begin to experience sadness and apathy that result in clinical depression. This condition requires professional intervention. Thus, it’s important for adults to be alert to provide support when needed.

Just keep in mind that the manifestations of childhood depression aren’t the same as those in adults. Children can adopt aggressive behaviors with their relatives or peers that actually disguise deep sadness and despair.

In these cases, it’s common for a vicious pain-food cycle that perpetuates the problem to develop. Emotional distress makes many children turn to food for comfort, eating more calories than they need. In addition, sadness and apathy can lead to a lack of activity that worsens the situation.

In conclusion, it’s really important to help children understand their internal states so they can be able to distinguish between real hunger and emotional eating. It’s also important to provide tools so they can manage their negative emotions without turning to food or any other destructive behavior.