Schedules of Reinforcement: What They Are and How to Use Them

If you want to establish and maintain certain behaviors, there are different schedules of reinforcement that you can use. 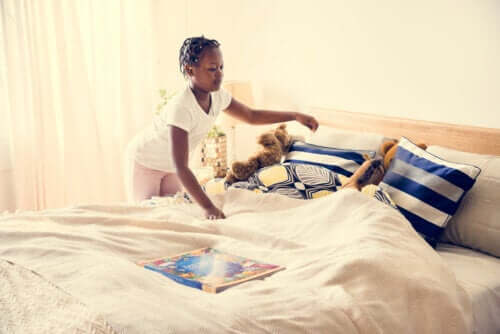 Behaviorism is a psychological theory that offers a variety of techniques to modify behavior. Many of them are used in children’s education, at school or at home. One of the most familiar ones is positive reinforcement (rewarding desirable behavior). However, you can apply this in different ways, depending on your objective. That’s why today, we’ll talk about different schedules of reinforcement.

There are many stimuli that can act as positive reinforcers. These could be material things, such as treats and toys, or expressions, such as a compliment or congratulations.

However, the guidelines followed to use reinforcers may lead to different procedures. Furthermore, depending on the behavior we’d like to establish, certain positive reinforcers could be more useful than others.

The most familiar technique is continuous reinforcement: a behavior is rewarded (reinforced) whenever it occurs. For example, every time children make their bed, you congratulate them. This is quite an effective technique to encourage new behaviors, because it gets more responses.

On the other hand, there are partial schedules of reinforcement. In this case, reinforcers don’t always follow the desired behavior. Sometimes you reward them, and sometimes you don’t. Therefore, this technique is more suitable for preexistent behaviors. And, by doing this, behaviors depend less and less on reinforcers.

An example is when we compliment our children for cleaning their bedrooms. Even though this is a regular activity, congratulating them once in a while will help them keep doing it.

Within partial schedules of reinforcement, there are two different categories. Ratio schedule of reinforcement occurs after a certain number of responses. For example, if we reward our children for brushing their teeth by giving them a sticker, we should do it after the third time.

Whereas, interval schedule of reinforcement occurs after a certain amount of time has passed from their last response. For example, it occurs when children are studying in their rooms and their parents visit them from time to time to compliment them and cheer them up. Reinforcement appears from time to time. However, children must be acting as desired when reinforcing them.

The negative aspect of interval reinforcement is that there’s a pause between reinforcers. Then, children know that a certain amount of time will pass before another visit, so they may stop for a while. This problem is less frequent when pauses are shorter.

Ratio and interval schedules can be fixed or variable. A fixed ratio schedule of reinforcement occurs after a certain amount of responses (receiving a sticker after 3 times of brushing their teeth). On the other hand, a variable ratio schedule is more or less the same, but there’s not a fixed amount of responses to reward them (they may receive the sticker after 2, 3 or 5 times of brushing their teeth).

The same happens in the case of interval schedules. A fixed interval schedule of reinforcement occurs when reinforcers appear after a fixed amount of time. If a boy likes to read, every ten minutes he’ll reach a point that he’ll be able to trade for a reward later. Whereas, if there’s no fixed time, it’ll be variable (the boy is studying and you cheer them up once in a while, sometimes every 15 minutes, others every 20 minutes, etc).

Benefits of schedules of reinforcement

Ratio schedules of reinforcement seem to be more effective than interval schedules. However, if both of them are fixed, there’s a pause between reinforcers. To avoid this, it’s better to make short pauses and less repetitions, or follow the variable type. Finally, depending on the type of behavior you’re working on, you can choose a different schedule of reinforcement.

The Use of Rewards and Punishments for School Grades
In this article, we'll analyze whether using rewards and punishments for school grades is good or not. Find out if there are other alternatives. Read more »
Link copied!
Interesting Articles
Childhood psychology
Rituals to Help Your Child Say Goodbye