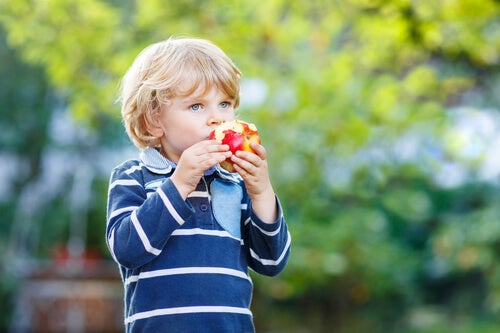 Rumination disorder in children is involuntary, infrequent and of short duration. But what is rumination?

Rumination is the regurgitation of food to chew and swallow it again. This occurs as a consequence of a series of psychological factors.

Age of onset for rumination disorder

Rumination disorder in children usually occurs between 3 and 12 months of age and lasts approximately one month. It affects boys more than girls and can develop in adults with intellectual functional diversity. Babies with mental retardation are more likely to experience it.

Rumination or lack of affection?

Rejection from parents, lack of attention, family stress, traumatic sexual situations or a lack of stimulation are all factors that predispose a baby to the involuntary onset of rumination disorder.

To be considered a disorder, rumination must be frequent, occurring at least several times a week or every day. In adults, especially in cases of mental retardation, regurgitation occurs voluntarily, without nausea or vomiting.

It is associated with a contraction of the stomach followed by relaxation of the lower esophageal sphincter. This causes a cavity between the stomach and the oropharynx that brings the food back into the mouth.

Some specialists believe it has self-stimulating and soothing effects.

Before a specialist provides a definitive diagnosis, possible congenital anomalies in the baby’s digestive system should be ruled out. The risk of hiatal hernias or pyloric stenosis should also be assessed.

If anything disturbing is noticed, this can be valuable information for the doctor, since some signs indicate the presence (or absence) of rumination disorder. Such signs include:

Malnutrition, which can be potentially life-threatening, is one of the consequences of this problem. Simultaneously, it affects the child’s immune system and thereby decreases resistance to diseases.

It is also associated with lower weight gain than what is expected for babies under one year of age. If not attended to in time, malnutrition will delay development and growth.

When a baby has rumination disorder, his body position can be an indication. He keeps his back tense and arched with his head back and makes sucking movements with his tongue.

At first glance, the baby gives an impression of satisfaction when regurgitating, but then he becomes irritable and hungry.

Because this problem is usually of psychological origin, strategies based on behavioral techniques are usually applied in the treatment of rumination.

We must identify the symptoms of rumination and look for appropriate behaviors. It is a behavioral practice based on operant conditioning and is applied in different ways.

From the coercive point of view, the child is forced to eat more food in order to eliminate the desire to chew. Placing bitter or unpleasant flavors in the food or directly on the tongue every time he starts ruminating is another way of suppressing it.

On the other hand, social reinforcement through affectionate words, kisses or hugs is an excellent tactic. A treat as a reward when he does not practice regurgitation can have good results.

An effective technique is to improve the hostile environment that may surround the child. Patience, affection and understanding, as opposed to abuse or rejection, are essential.

Parents must receive psychotherapy. With affection and attention, it is also possible to capture the child’s attention when the typical movements of rumination disorder begin.

Rumination disorder in children is not linked to bulimia nervosa, binge eating or voluntary restrictions on feeding. It is directly related to a lack of affection and attention from parents.

There is no known form of prevention. Rumination disorder is fought with love, correcting family situations that affect the child’s emotional development. It is the first step toward a healthy and happy life.