Is It Safe to Have Sex During Postpartum Confinement?

During the first 40 days after giving birth, it's important for new parents to understand and comprehend one another. During this period, also known as postpartum confinement, new mothers should abstain from sexual intercourse. 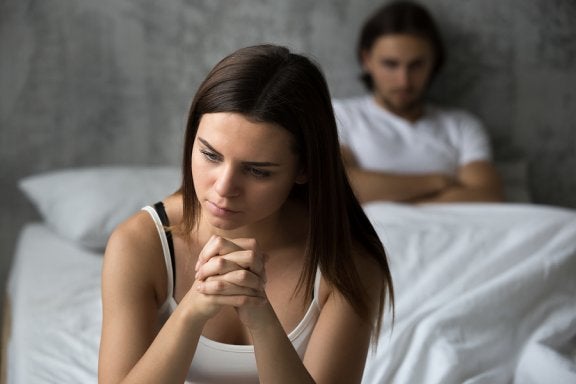 It’s common for many parents to maintain sexual relations during the first 6 weeks after having a baby. They do so because they think that 40 days of abstinence is too much. But the fact of the matter is, women who have just given birth need this time to recover. Having sex during postpartum confinement does involve a number of risks.

Postpartum confinement refers to the time period after birth in which a woman’s physiology changes completely. Her hormones and reproductive system go back to normal. This period is when a woman’s body starts to recover from pregnancy.

Remember especially that this time of rest is very important for your reproductive system to recover completely. Don’t forget that your body has been home to a human life for the last 9 months.

You should in no way take postpartum confinement lightly. Below, we’ll explain why.

The risks of having sex during postpartum confinement

The vaginal canal is very sensitive after vaginal birth. Therefore, any movement or rubbing within the vaginal walls can produce unusual bleeding.

Vaginal penetration during the first 6 weeks after giving birth is extremely harmful to new mothers. Taking this risk increases a woman’s chances of contracting infection, be it fungal or bacterial.

During this period, though it’s unlikely, it’s possible for women to become pregnant again. Many people believe this isn’t possible, but that’s actually a myth. Therefore, it’s important to be cautious.

As for women who have had a C-section, having sex during the following 40 days is extremely dangerous. Pressure and abdominal contractions can in fact cause the C-section wound to reopen. Therefore, abstaining for sexual intercourse is an absolute must.

Having sex during postpartum confinement – so soon after giving birth and before the birth canal heals – can be quite painful. This is because the tissue can still be swollen.

Far from feeling pleasure, women experience burning and discomfort. They also increase their chances of suffering the above mentioned complications.

As you can see, whether a woman has given birth vaginally or by C-section, it’s still important to recover properly. Only your own doctor will be able to decide if you can or cannot have sex, based on his or her observation of your recovery.

Being patient and taking care of your body during this period will prevent a lot of headaches – and danger.

Some women still experience a high sex drive during the confinement period. This sometimes leads them to believe that they’re ready to reactivate their sex life.

Of course, their partners may also be eager to have sex, motivating the couple to violate confinement. Just the same, both partners must practice patience and place priority on the new mother’s health.

“Postpartum confinement refers to the time period after birth in which a woman’s physiology changes completely. Her hormones and reproductive system go back to normal.”

What you should do during the confinement period

While you find yourself in postpartum confinement, it’s important that you and your partner put a few suggestions into practice. The advice below will help you both face the waiting period:

Being aware of the risks that are involved in having sex during postpartum confinement is key. It’s up to you to care for yourself and allow your body to recover completely, or put your health at risk.

Talk to your partner so that both of you are aware of the dangers. Remember that your well-being affects your entire family, especially your new baby. Being in optimal health is important, especially during these first months.