Wheezing in Children: Symptoms and Treatment

Wheezing in children can be a symptom of a respiratory disease. That's why it's important to pay attention to wheezing sounds when children breathe. 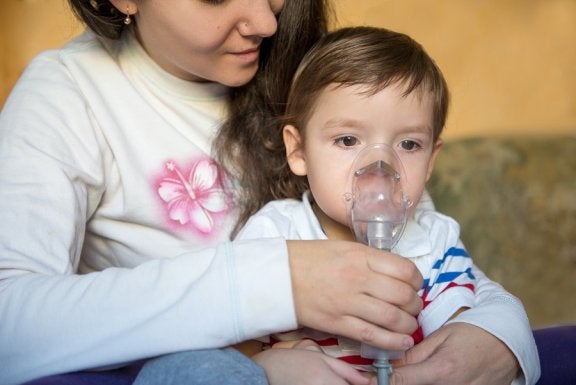 Different types of diseases can lead to wheezing in children. This is where there is a whistling, shrill sound while breathing. It happens when air travels through the narrow breathing passages in the lungs.

According to the pediatricians Lydiana Ávila and Manuel Soto from the National Children’s Hospital of Costa Rica, there are several childhood diseases characterized by this whistling sound.

What is wheezing in children?

Wheezing is a respiratory noise, usually when exhaling. However, it can also happen while inhaling.

Why does this happen?

According to the previously mentioned specialists, whistling happens when something blocks air flow. This produces a vibration in the walls, causing an audible sound.

Some causes of wheezing in children are:

Symptoms of whistling while breathing

Whistling while breathing usually comes with other symptoms. However, the symptoms depend on the cause. When you listen to your child wheeze, it’s important to pay attention to the following symptoms:

“Wheezing happens when something blocks air flow. This produces a vibration in the walls, causing an audible sound.”

When it comes to severe wheezing, specialists will request a chest x-ray. With it, they can find signs of foreign substances, pneumonia or heart failure. Then, using a finger sensor, they can determine the oxygen levels in the blood. In technical terms, it’s called pulse oximetry.

On the other hand, asthma attacks don’t require additional tests unless there are signs of severe respiratory problems. Kids who have frequent asthma attacks may need more tests.

However, if inhalers or other drugs help relieve these problems, they probably won’t need them. Doctors may do tests requiring kids to swallow, or even look into the breathing tubes.

Also, in the physical exam, there needs to be key data: for example, if they are underweight, have heart murmurs, and of course, whistle while breathing.

In short, wheezing in children can be an indicator of a respiratory disease. It could affect kids’ quality of life. If you notice a whistling sound, go to the doctor immediately. There, the doctor can perform the necessary tests.

Link copied!
Interesting Articles
Psychology of Mothers
The Invisible Task of Mothers in the Home