Arguing in Front of Your Children is a Big Mistake

Of course, discussion and communication are an indispensable part of any couple's relationship. However, arguing in front of children can leave a lasting mark on them. In this article, we'll tell you more about the issue. 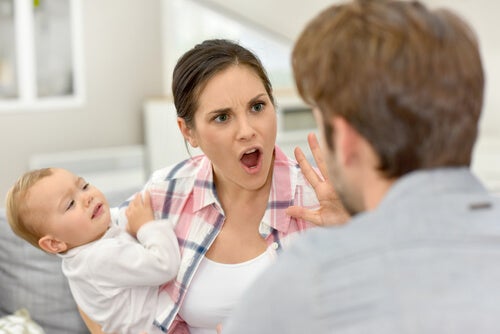 As parents, we sometimes forget that our children aren’t old enough to deal with adult problems.

In other words, we think they have the tools and maturity to handle these situations in a healthy way. However, they most definitely do not.

Children can easily misinterpret tone of voice, abrupt movements, and other types of non-verbal language that occur during arguments. This is true even for small babies.

Dialogue and the importance of communication

Discussion and communication are a normal part of any relationship. In fact, they can be a sign of a couple’s mental health. But this all depends on the type of discussion and the level of aggression.

It’s always good to approach any issue without getting agitated or having a negative effect on those around you. When an argument comes with yelling and harsh language, children can get quite scared.

There are a number of consequences that can come from parents fighting in front of their children. For one, you’re giving your child a negative model of relationships.

Your behavior also makes rules and limits seem ambiguous to your little ones. Also, these situations can be very confusing and overwhelming for such young minds.

Consequences of arguing in front of your children

First of all, when children witness their parents fighting, they receive a negative model of relationships. Children are like sponges, and they’re constantly taking in information from their environment.

By arguing in front of your children, you’re indirectly teaching them that this is how to solve their differences.
Your children will observe whether you understand one another or not. They will pick up respect, or lack thereof.
If you interrupt one another, your child will learn to do the same. The same is true if you avoid eye contact. Your children will follow your lead, and your conduct will form their behavior patterns and personality from a young age.

Another consequence of arguing in front of your children is that the rules and limits you establish become ambiguous. Ideally, parents should be a united front and work as a team when it comes to setting guidelines for the home.

Although you won’t always see eye to eye, fighting in front of your children constantly will inevitably lead to you losing authority.

Little ones cry and come to question what each of their parents is saying, all because the other parent is in disagreement. In the end, they become uncertain about who to obey, or they learn to manipulate their parents to their favor.

Fighting in front of your children is also harmful because it causes them to ask themselves who’s side they’re on.

Children should never feel the need to referee or mediate between their parents. It’s not a child’s job to act as a judge or take sides. Both parents are extremely and equally important to a child.

It’s okay for your children to know that you have your differences and need to talk them out. However, your children should never have to take sides or even know particular details of the argument.

Arguing in front of your children leaves a lasting mark

One of the most painful memories that children can have is, without a doubt, witnessing tension between their parents. For children, parents are there to care for them and protect them.

When these two crucial figures in a child’s life begin to yell and hurt one another, the child feels afraid and vulnerable.

Development and Psychopathology magazine published a study that was carried out by New York University’s Steinhardt School of Culture, Education, and Human Development.

According to the study, when children witness aggression between their parents, this can negatively mold their emotions.

The investigators evaluated some 1025 children between the ages of 2 months and 5 years. The tests were designed to measure the level of chaos in families.

The researches carried out their observations for 58 months. They realized that children exposed to higher levels of aggression in their homes had a harder time identifying and regulating their own emotions.

Their observations also showed that the ability to identify and control one’s own emotions is linked to the development of emotional intelligence.

A child that witnesses agression between his parents will have a hard time processing emotions such as sadness, abandonment and fear.

When children aren’t able to manage or process these emotions, it leads them to develop symptoms of anxiety and depression in the years to come.

We know how important knowing how to identify and express what we feel is in our daily lives.

If we deprive our children of that ability, it may lead to severe problems in the future. Therefore, it’s best to always argue in private.