3 Buddhist Stories for Children with a Wise Message

Buddhist stories are a great educational tool for children. They're very interesting, easy to understand and have deep messages. 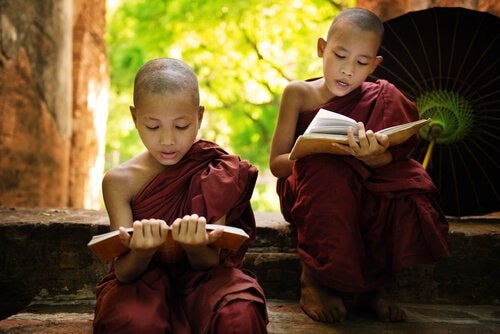 Buddhist stories are full of profound messages that can teach children about important virtues, people, and life.

Buddhism encompasses several valuable teachings, philosophies, beliefs and traditions that help human beings develop wisdom and live a complete life. It seeks to remove all selfish thoughts, resentment and envy from our minds, in order to make room for reflection.

The world is a difficult place to live in nowadays. Everyone is in a hurry, oppressed by work and giving more than they can to obtain material objects. Psychosomatic illnesses (mainly those caused by stress) are very common due to our misguided way of life.

Buddhism helps us learn to achieve inner peace. We cannot forsake our life’s obligations, but we can find balance, and time for rest, meditation and spirituality.

How to introduce children to Buddhism

Children today are becoming increasingly affected by stress. They’re increasingly burdened with obligations and requirements, and from an early age. They’re also constantly being restrained from their need to play, cry, shout and run. Furthermore, they’re greatly influenced by the material society we live in.

Buddhism discards all things material and focuses on caring for people and their spirits. Buddhists believe that what we perceive through the senses is not enough to explain human nature. In other words, there is spirituality beyond what the eye can see.

“Holding on to anger is like grasping a hot coal with the intention of throwing it at someone else: you are the one who gets burned”

Buddhism encourages kindness and gives us valuable tools and wisdom. Through Buddhist stories we can teach these lessons to children as well.

Buddhist stories tell insightful tales that we can read with our kids. Here are some of the best choices:

3 Buddhist stories for children you can read at home

1. Siddhartha and the Swan

This is a thrilling story. Siddhartha was the son of a king. When he was a little boy, a wise man told him he would become king, but one day he would leave his palace to help others. His father was worried and kept his son close. Since he was little he was in the care of the best teachers in the kingdom.

Siddhartha loved animals, and what he loved most was taking care of them. One day, he came across a swan with an arrow wound. While he tended to the swan, his cousin Devadatta showed up and said the bird belonged to him. After some arguing, they decided to seek the king’s counsel to find a solution.

They both told their version of what had happened. Before the startled eyes of everyone, an old man suggested that the animal would prefer to stay with his savior, and not with the one who tried to kill him. In that moment, Devadatta realized that animals have feelings too: they also suffer and love.

Then, the swan was cured. Once he could fly again, he went back to his family. Siddhartha and the Swan is one of the most famous Buddhist stories for children, and people tell it all around the world.

2. Living in the Present

This is, undoubtedly, one of the most beautiful and brief Buddhist stories for children. We can put it to use in our everyday life, especially nowadays.

This is the story of a conversation between a man and an elder. The first asked the old man for the key to become wise. The elderly man answered very simply. He told him that one must live in the present moment.

The old man explained that when he eats, he just eats; when he sleeps, he simply rests; when he talks to someone, he is dedicated to just doing that.

“All wrong-doing arises because of mind. If mind is transformed, can wrong-doing remain?”

This is another Buddhist story that suggests putting the brakes on our frantic way of life and allows us a moment for introspection.

One day, a strong young man came to a lumberjack camp looking for a job. Seeing his appearance, the manager hired him without hesitation. He did an excellent job on the first day, and everyone was happy with his performance.

Strangely, on the second day his production lowered by half, even though he had worked just as hard. On the third day, his results were even worse. He only felled a few trees.

When they asked him about his poor performance, the young man answered that he didn’t know what was happening. He had worked just as hard every day. Then his boss asked him a question: When was the last time you sharpened your axe?

All these stories convey valuable and lasting messages if we know how to tell them properly. Try to create a relaxed environment, suggest a mindful reading, and enjoy this moment with your children as you share and reflect on the timeless wisdom of Buddhism.

Link copied!
Interesting Articles
Raising a child
Repeating a Grade: How Does It Affect Children?

Stimulating language in 1- and 2-year-olds is important when it comes to the correct development of language. Before looking at…

Stimulating your baby
The Early Stimulation of Premature Babies

The early stimulation of premature babies is very important when it comes to their proper development. To work with these…