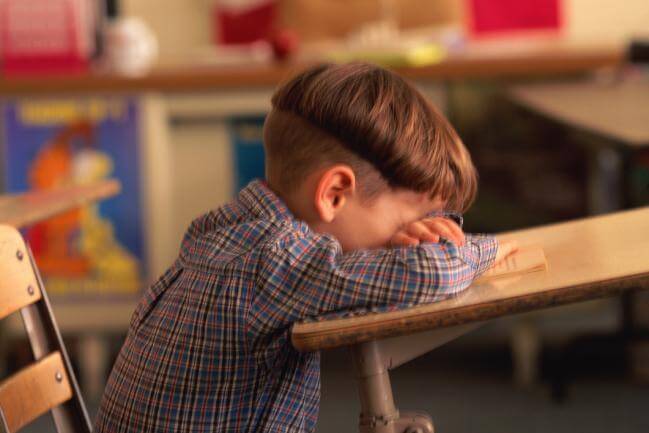 Poor academic performance at school is a serious issue that should be addressed. In order to find the right solutions, the first thing that must be taken into account is the cause.

The causes for poor academic performance can be external or internal. External causes include: school environment, social interaction, teachers and teaching techniques. While internal causes may involve problems at home, as well as children’s emotional state and maturity.

Regardless of what the cause may be, poor academic performance is not a situation that warrants punishment. It shouldn’t be about blaming people. It should be about identifying problems and solving them.

In other words, a proactive attitude is beneficial both for parents and for their children. The collaboration of teachers and therapists can also be very useful.

If you can, encourage good study habits for children with poor academic performance. It is all about being patient, establishing routines and guidance. This has to be done little by little in order to prevent them from feeling pressured.

Some parents aren’t strict with their children when it comes to creating and maintaining a routine as well as educating them in values such as responsibility and perseverance.

In a lot of these cases, the parents aren’t even interested in knowing what their child’s homework is about. It is clear that a parent’s bad attitude can significantly reduce a child’s performance in school.

Many children avoid doing their school work because their parents set bad examples. This has negative consequences in the short, medium and long term. Parents can also influence their child’s performance negatively if they delegate their responsibilities to technology.

The excessive use of the internet, smartphones and other electronic devices occupies some children’s time until it completely overshadows their interest in school. This can happen when parents have relaxed rules that don’t set limits on the use of these devices.

Poor academic performance can also be a reflection of problems at home. The most common problems are:

Child abuse can cause poor academic performance. The stress and fear that occurs when they’re at home generates tension that prevents them from focusing on school work.

Financial problems and health problems can also significantly affect a child’s academic performance. For example, a mother who is sick with cancer can be a serious concern for a child and take up all of their attention.

Post-traumatic stress can cause low academic performance in children. It isn’t always easy to identity but when it is, it must be attended by a professional. This condition usually manifests with the following symptoms:

Disorders that are associated with poor academic performance

This is a condition that affects approximately 3% of the world’s population. ADHD is characterized by increased motor excitability (running, jumping and difficulty focusing in the classroom).

Unfortunately, due to a lack of information, the term “problem child” is often used and the condition goes untreated. Detecting and treating the disorder will help improve the child’s academic performance.

Around 50% of people who suffered from ADHD in their childhood will suffer from it in adulthood.

These difficulties can affect a child to a greater or lesser degree depending on the case. It is always necessary to put into practice a sustainable strategy to solve the problem.

Learning difficulties like dyslexia or dyscalculia are causes of poor academic performance in children.

A bad diet can significantly affect a child’s academic performance. The lack of nutrients deprives a child from the energy needed to perform their activities and pay attention in class. A poor diet can also affect their biological development.