Sooner or later, everyone must face conflicts in their lives. That's why having the right tools to handle these situations is fundamental. So, how can we teach our children about conflict resolution? 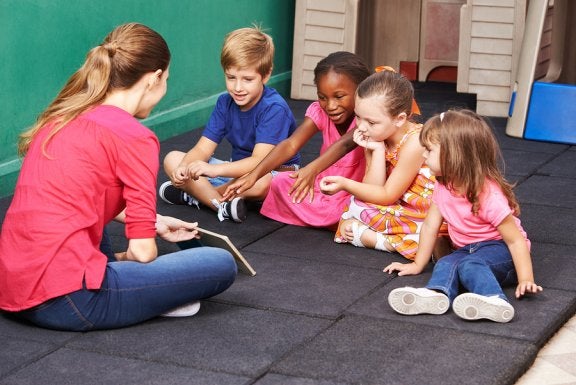 A fundamental part of education and child-raising is teaching children about conflict resolution. To make that happen, they must express their feelings, and develop communication skills and tolerance. Children must also maximize their ability to work in a team and think about the common good.

Several different games are useful for reaching this objective, especially in educational environments. These games help establish conflict resolution dynamics in a fun and creative way for children.

Below, we’ll look at three examples of games that help children learn how to resolve conflicts.

First, several volunteers form a small circle – about 6 or 7. The rest of the children will make a larger circle around the first.

Whoever is directing the game – usually a teacher – will suggest an issue to debate. This can have to do with a real conflict that exists among the group, or it can be a fictitious issue.

The children in the inner circle will debate the problem. Once they’re finished, the rest of their peers will do the same. In this second conversation, they’ll also analyze why the first children volunteered to be in the inner circle. What were their motives?

At the same time, they should talk about how they disagreed with the opinions of other children. If this occurs, they analyze whether or not respect was shown towards different points of view.

Finally, they should discuss whether or not any of them changed their opinion after the exercise. The role of the guide is fundamental in this game.

In the spiderweb game, the participants should move through a spiderweb without touching it. The goal of this educational game is to build up children’s collective ability to make decisions and solve conflicts. Children learn to trust in their peers and value cooperation.

To carry out this activity, you need a sturdy string and an open space – preferably outdoors. You’ll also need several posts or trees to secure the string to each side.

Before the games starts, you must build a spiderweb with the string. The web should contain holes of different sizes – the largest holes should be somewhat elevated.

You can increase motivation among the children by creating a story about the need to “escape” through the web.

At the end of the activity, the group will carry out an evaluation. During this debate, all of the participants will analyze the mechanisms of cooperation that they used. The guide will also ask them to talk about how they felt throughout the exercise.

The spiderweb allows children to solve problems as a group. As an indirect result, the children will improve their social skills.

Role playing is a common way to teach children about conflict resolution. The main objective is to develop and foster empathy among the participants. The activity involves acting out a real or fictitious situation. There can be up to approximately 20 participants in the game.

The guide or teacher should propose a conflict situation. If there are already issues that have produced tensions or conflicts in the group, this is a good opportunity to address them. Otherwise, the guide can also invent a hypothetical situation.

To begin, the guide asks for volunteers to act out the the roles of the story’s main characters. Of course, the children will have a few minutes to study their characters.

Then, the children act out the situation. After the role playing, the children will debate as a group. The point of the discussion will be to come to a common understanding – a sort of agreement.

As you can see, all of these activities are simple and fun. Therefore, it’s easy to capture the attention and motivation of children to participate, especially at school and with their friends.

Choose whichever one you think will be most effective in teaching children the important ability of conflict resolution.