How to Encourage Divergent Thinking in Children

Divergent thinking is about cultivating not only logical and structural thought processes, but also the creative capacity of each individual. 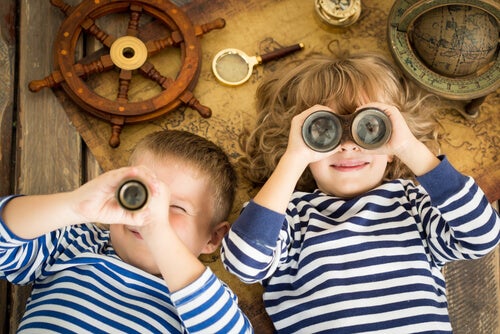 Divergent thinking is a process in which creative concepts and thoughts are encouraged. Some ways of promoting divergent thought include encouraging exploration and experimentation, as well as giving children problems to solve that require thinking outside the box.

What is this method about?

This method promotes the idea that thoughts, when deliberately stimulated, occur in a natural and spontaneous way. Put simply, this happens when we have an idea that also generates connections with other thoughts and prior experiences.

Divergent thinking clearly and unmistakably distinguishes itself from traditional linear thought. While the latter prioritizes logical progression and sequential thoughts, the former believes in the fluidity and spontaneity of creativity.

However, divergent thinking doesn’t exclude or substitute structured and logical thought processes. Quite the opposite, these different forms of thought complement each other to promote the greatest creative capacity.

Ideas that are born out of spontaneity through divergent thought are then organized through the structures of logical, linear thought.

Firstly, we allow the imagination to roam free and stimulate thought through creative experiences. Next, we present children with various problems, to which they’ll come up with possible solutions. Lastly, the children compare their solutions and choose the one they believe is best fit for each situation.

The concept of divergent thinking suggests that we should rethink our definitions and prejudices regarding intelligence.

In the past, children who were smart simply got good grades in school. Or they adapted to very strict behavioral standards, as well as logical reasoning.

Not withstanding, specialists who deal with divergent thought with children were able to observe that intelligence manifests itself in many ways. Each person expresses and develops his or her potential in a very unique way.

The problem is that not all family structures or traditional institutions make room for other forms of intelligence. This leads to children not being sufficiently stimulated, causing them to downplay their sensibilities. Ultimately, this results in the child feeling that he or she doesn’t belong.

Where Does Creativity Come From?

The same specialists also demonstrate that creativity isn’t necessarily dependent on intellectual capabilities. Intelligence can actually be associated with certain personality traits, such as:

Also, happiness and a positive attitude are important for encouraging divergent thinking in children. Children reflect their surroundings and the environment they live in.

In other words: a home with healthy relationships promotes a higher self-esteem. This, in turn, makes for more curious and creative individuals.

Intelligence manifests itself in many ways.

Specialists find that each one of these six exercises in divergent thought has an infinite number of possible solutions. Using these with your children is an excellent way to stimulate their creativity and improve their self-esteem.

1. The coin in the cup of coffee

The question is as follows: “I dropped a coin in my coffee; the cup is full but the coin is dry. Why?”

2. An island in flames

We’re on an island with lush vegetation, surrounded by hungry sharks. One side of the island is in flames and the wind is at its back. How do we avoid being burned?

There’s a railroad that has two train tracks. On the tracks, there is a tunnel. However, this tunnel isn’t large enough to fit two trains at once. Then, one day a train enters the tunnel at one end and another train enters at the opposite end. They didn’t crash into each other. How is this possible?

There was a woman who bought a parakeet at a pet store. The seller told her that the parakeet would repeat everything it heard. The woman liked this idea a lot. A short while later, the woman returned to the store complaining that the parakeet never said a word. However, the seller didn’t lie to her. Why didn’t the parakeet talk?

We have a bottle of wine that is half full and has a cork sealing the top. How can we drink the wine without breaking the cork or smashing the bottle?

I want to take a shower, but I’m not in my own bathroom. I’m struggling to figure out which way to turn the knobs to get cold and hot water. What can I do if I want to be sure to turn on the hot water before the cold water?

Divergent thinking in children helps them prepare for unexpected events and adversities of adult life. It also strengthens their self-esteem and stimulates their desire to discover and explore new horizons.