In this article, we'll show you 4 board games that provide real educational value for children and that will allow you to enjoy unique moments with your family. 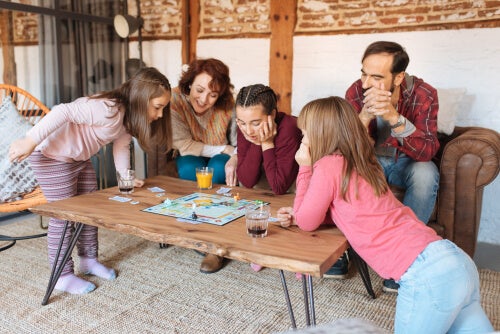 Educational board games are excellent for children’s cognitive development. Keep in mind that even the simplest board games have some type of educational value in them, such as counting or recognizing colors.

Other than giving children the opportunity to learn about different things while they’re having fun, educational board games allow parents to spend uninterrupted quality time with their kids.

In addition to spending time together as a family, children can learn to take turns, respect others, and work in teams when playing fun and interesting board games.

It’s common for parents to want to let their children win every time they’re playing with them. This is because they don’t want them to feel sad or damage their fragile self-esteem.

The thing is that, as parents, it’s important to teach life lessons to little ones. By letting them lose from time to time, they’ll slowly but surely start to realize that they can’t win at everything every time and that it’s okay to lose once in a while.

Having said that, it’s vital for parents to let their children experience these situations since they’ll help them learn to handle the triumphs and defeats that will come later in life.

Up next, we’ll be sharing with you 4 educational board games for children. Let’s check them out!

The first board game we’ll be sharing with you is the popular “Guess Who?” game. It’s ideal to strengthen memory and reasoning. It’s a simple guessing game for two players that consists of discovering a certain character.

The game has 2 boards and 24 different characters, each with their respective card. It consists of asking questions that can only have one answer: either “yes” or “no.” The objective is to find out which character the other person has.

With every answer, each player continues to discard characters and hide their cards on the board until there’s only one left. The person who guesses the most characters wins.

The second option we have for you is a card game that can be played by up to 10 people from ages 7 and up. This game can help children improve their vocabulary and learn math.

Each player starts with 7 cards that were previously given to them face down. The rest of the cards are then placed in a draw pile. The players must make room for a new draw pile of discarded cards (next to the one that’s already established), which will start to build up as they begin to play.

The game starts once a player has placed a card from the draw pile in the discard block. The first player is usually the one next to the dealer and the game generally follows a clockwise direction.

If a player doesn’t have any card that matches or if, for any reason, they decide to skip the round; they have to draw a card from the draw pile. If they can use the card they took out, they must add it to the block. Otherwise, the game continues with the next participant. The player who runs out of cards first is the winner.

The trick with this game is that, when a player only has one card left, they have to yell “Uno!” If another player notices that they haven’t said it, they can call them out, which will make them lose automatically. That’s why this game also helps children be more agile and attentive.

This is a card game that allows children from 8 years old and up to improve their creative skills and linguistic competence.

To start the game, one of the players will be the narrator and will look at the images of the 6 cards they have in their hand. They must choose one of them, make up a sentence, and say it out loud without letting the other participants look at the card.

Then, the narrator will proceed to shuffle his card with the cards that he received from the other players. All the images will be shown face up and each player will have to guess which image, out of all of them, is the one that the narrator described in the beginning.

Depending on which participants guess the card correctly, the narrator and the other players will get a score. The game ends when the deck is empty or when the 30 points are reached. The player with the most points will be the winner of the game.

Among the most popular educational board games for children, dominoes is undoubtedly one of the best ones. In fact, this game is ideal to play with the whole family since it allows up to 4 players. Dominoes favors children’s concentration and memory. Let’s see what it’s about.

A standard dominoes game contains 28 rectangular pieces marked with points (from 0 to 6) on each end of the side. The back of the pieces is usually white.

To play this game comfortably, participants must place the pieces on a flat surface with a decent amount of space.

The pieces must be distributed among the players until each one of them has a total of 7. To participate, the players must add a piece to either end of the first domino piece (previously established).

The players can only add a piece if it matches a number on an open end of the board. The participant who runs out of pieces first is the winner.

All these fun game ideas will help improve your child’s cognitive abilities while having fun. But make sure you’re patient with your child, as teaching the rules of each game may take some time.