5 Games to Encourage Listening in Children

Lack of interest, impatience, and distractions can all stop your children from listening. These games are highly recommended so that they learn to listen without losing interest. 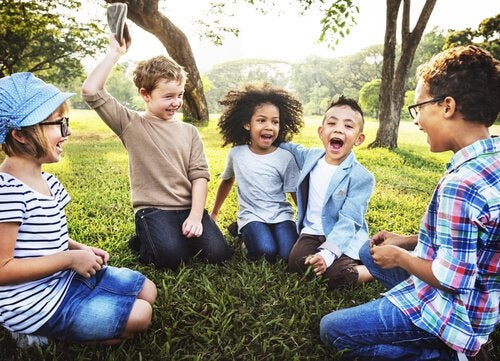 Do your children listen to you or just hear you? Of course, there is a difference. These 5 games encourage listening in children in a fun way, and get them to pay close attention to what you’re saying.

How Do These Games Encourage Listening in Children?

These games that encourage listening in children are based on particular instructions that children need to follow.

If they don’t pay attention, they won’t be able to follow them properly. That’s why they’re also good for helping children who have issues with concentration or language.

Sometimes, it simply won’t be enough to give them instructions: you’ll need to give them some examples of how to play the game. Don’t hesitate to show them a number of times before they understand what to do.

Try to encourage a positive attitude through motivation and support. We recommend that you and another adult are involved in the game. This way, if at any point the children get distracted or stop playing, you can intervene to keep them from losing interest.

If the children still don’t understand your instructions after many attempts and demonstrations, try it another time or move on to a different activity. Some children might just need a bit more attention or be better suited to a different type of activity.

5 Games to Encourage Listening in Children

In this game, the children have to carry out an action when they hear the phrase “Simon says…” So, you could say to them, for example, “Simon says touch your nose,” “Simon says lift your right leg,” or other similar phrases.

Make some cards with pictures of fruit on them. Have the children sit in a circle and give each one of them a card. Name two fruits at the same time, for example, apple and orange.

The children who have those fruits have to swap places. Before you start, tell them that if you say the phrase “fruit salad,” everyone has to swap places.

This activity is very simple but can hold the children’s interest. Read them a short story or tale and ask them to do an action every time you say a particular word.

“If the children start to get distracted or stop playing, you can intervene to keep them from losing interest.”

Gather up the following things: cards with subjects to talk about, a hat, and an egg timer (this is optional, you can use a normal clock).

Have the children sit in a semi-circle and sit in front of them. The game involves giving the hat to one child and asking him to pick a card.

The child then has to talk about the subject he’s picked for one minute and then pass the hat to one of the other children. Then the next child picks a card and repeats the process.

While they’re waiting for their turn, the other children need to stay silent.

Then, the child to your right needs to continue the phrase by adding another item and repeating the whole sentence. For example, “We’re going to buy apples and bananas.”

Whatever games you choose to encourage listening in children, try to keep them interested. If you notice the mood changing in the group, change the game or have the children change roles or positions.

After a while, the children will become more involved in the game and you’ll really notice their progress. Find out what activity they enjoy the most and try to vary it to keep them motivated.