Home » Parenting » Learn how to be a mom » Behavior

5 Keys to Raising Children in the 21st Century

You’re probably constantly bombarded by all sorts of information on parenting. Keep reading to discover five keys to raising children in the 21st century. 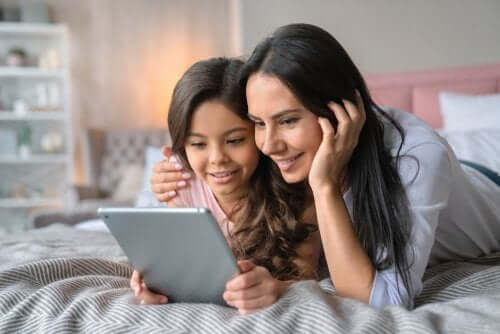 Today, we live in an era where parents are more educated than ever. However, there’s also more doubt than ever regarding the proper way to raise children. That’s why we’ll provide five keys to raising children in the 21st century in this article.

Have you ever felt that you aren’t fully informed? That you can’t assimilate everything you hear regarding parenting? And that you’re confused due to all the conflicting messages out there?

If your answer is yes, don’t feel guilty, as you’re in the same situation as the majority. Society tells us we have to be perfect parents. However, it doesn’t make it easier, as it promotes inappropriate behaviors in children, such as consumerism, stress, and anxiety.

To try to counter that pressure, in this article, we propose five keys to raising children in the 21st century.

Keys to raising children in the 21st century

If you reached this point, you’re in luck, because you meet the first criterion for raising children in the 21st century in the best possible way: interest. Interest in doing it right and discovering what’s best for your children.

Yes, it’s true that everyone comments on how to raise children properly. However, parents are the ones who know their children best. They know what they like and what is and isn’t suitable for them. Thus, you should just trust yourself!

Be critical of other people’s opinions. There are no universal laws in parenting. Thus, what’s useful for a child may not be useful for another. Sometimes, even two siblings need different things. Thus, you need to tailor parenting to your family and each child.

However, experts do know that certain parenting styles allow children, for example, to develop better socio-emotional skills, be more autonomous, and be more self-confident.

Thus, the second criterion you need is critical sense. Don’t believe everything you read. Also, inform yourself and discover whether the person who wrote the information is accredited or not. Facts and opinions are completely different things. Anyone can give their opinion. Thus, we invite you to just pay attention to empirically supported facts.

Undoubtedly, to date, the greatest enemy of raising children in the 21st century is the lack of time. You need time to raise your children, learn, repeat if necessary, make mistakes… and, above all, to be with your family.

It’s true that psychologists have always argued that the most important thing is to make sure that you’re enjoying quality time without any distractions, just focusing on the here and now. However, you need to meet some quantity requirements.

Yes, although time is really important when it comes to educating your children, patience goes hand in hand with it. Each child learns at their own pace, meaning you have to teach and encourage them. In addition, you have to have patience so you don’t give up before reaping the benefits.

Perseverance is a strength that’s related to the achievement of goals. You have to instill this value in children and teach them to tolerate frustration, pick themselves up after falling, and to never quit even when the going gets rough.

To do this, firstly, you must be persistent. Also, you can’t throw in the towel when faced with difficulties. This way, your children will see that you’re a role model of perseverance.

How to Raise Self-Sufficient Children
Knowing how to raise self-sufficient children is key to shaping the successful men and women of the future. Find useful tips in this article. Read more »
Link copied!
Interesting Articles
Behavior
Keys for the School Bully's Parents

School bullying is a major concern among parents and teachers, since it has become more common in recent years. In…