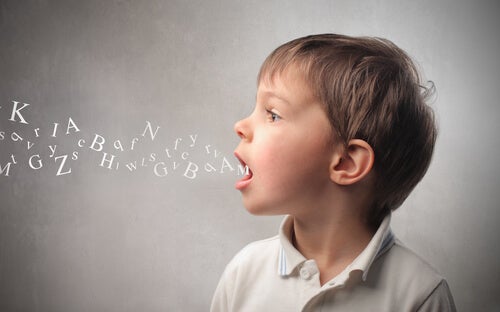 In this article we’ll talk about kids’ incredible capacity for learning languages in childhood and how we can help them.

During childhood, the human brain develops at an amazing rate. Thanks to this, and unlike what happens in adulthood, children’s brains are highly motivated to learn and record all the information they receive from the environment around them.

From this, we can explain aspects like children’s quick mastery of new technology or the acquisition of a second language in childhood. The latter is a common example that occurs in families who move to a country that doesn’t speak the baby’s mother tongue.

However, we don’t have to move to a new country if we want our child to learn a new language. Learning a second language in an educational context is also possible if it’s carried out at a young age.

Understanding the enormous potential for learning languages in childhood

During childhood, as we’ve already mentioned, the brain is in constant development, which is why the brain has a huge and almost automatic potential for language learning until a certain age.

There is a great gap between the ability to assimilate and learn languages in childhood and in adulthood. In a period of two to three years, an adult will show little to virtually no progress just from listening to a foreign language.

On the other hand, a 7 to 10 year old child in the same environment can master the language and speak it with a native accent. This doesn’t mean that a second language cannot be acquired in adulthood, but it won’t happen automatically and naturally. Instead, it must be learned in a didactic way.

This can be seen palpably in migrant families around the world, where it’s quite common for parents to never master the language of their new nation. Their children, on the other hand, manage to adapt easily to the second language.

How learning languages in childhood works

Learning, both in childhood and in adulthood, is a process that responds to the novelty of the stimuli received in the environment.

The stimulus, depending on its relevance or intensity, means that during the “critical period” (associated with childhood) we have a relative neuronal excitation that makes synaptic “plasticity” possible.

This is a process of collecting relevant information from our surroundings, simply known as learning potential.

The unique characteristics of our brain in childhood make it perceive everything as a novelty. Together with its rapid development, this causes both the neuronal excitement and learning potential to be much higher than in adulthood.

An adult’s brain has already collected all the information that has been useful to establish the basic patterns of behavior and survival of the individual in the surrounding environment. Therefore, it makes learning of extrinsic interest and requires willpower.

Tips to start helping your child learn a second language

The brain’s incredible ability to learn during childhood combined with the digital age we live in allows us to access a huge range of opportunities to promote language learning in children at home. This can be done without much effort and without the need to send them to a language academy.

It’s as simple as playing all kinds of children’s games or watching videos for children on networks like YouTube in a different language. Interactive video games, toys or didactic materials are also windows of opportunity to help your child begin to assimilate and learn a new language without realizing it.

Of course, the success of these strategies largely depends on the motivation and consistency of the parents. Once you start using these strategies, you’ll surely be surprised by how fast your child starts to pick up a new language.