Why Is It Important to Make Up in Front of Children?

We all know that arguing in front of the kids is never a good idea, but sometimes it can't be avoided. If this does happen, then we should also allow children to see their parents making up and solving the issue. Here's why. 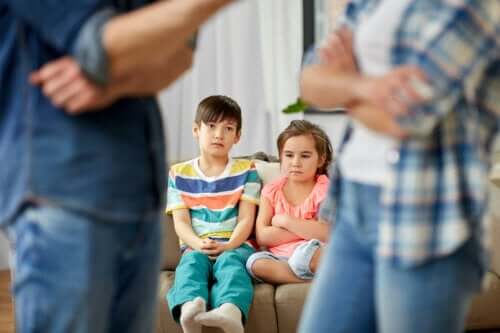 In everyday life, we’re often on autopilot and forget that, as parents, our kids watch everything we do and integrate it into their lives. In all families, parents argue and when children witness this, it can affect them. That’s why, if we have an argument with our partner in front of our children, then we should make up in front of them too.

When children see their parents arguing, they’ll often notice how the dynamics of their parents return to normal the next day. They’ll see how they approach each other again with affection and without tension. However, if children witnessed an argument, it’s important that parents also involve them in the conflict resolution. Let’s see why.

How do arguments affect children?

For an infant, their parents are their two main attachment figures. They trust their parents to provide them not only with basic love and care, but also with structure, security, and guidance. It’s always important for parents to function as a team for their children, as this shows strength that gives them confidence and peace of mind.

So, when parents start an argument in front of their children, they suffer, especially when the respect, assertiveness, and affection that should always dominate interactions don’t appear, despite disagreement. Seeing the two most important people in their world angry with each other, shouting or being disrespectful, truly affects them.

Here are some of the ways that seeing parents argue can affect children:

You should try to avoid arguing in front of your children. It’s always better to find the right time and place where the couple can discuss and resolve their disagreements without children being present.

Similarly, if something needs to be said in front of them, you should do so with great care and conscience. We mustn’t be allowed to take a lead and we must try to communicate as respectfully and assertively as possible.

However, parents are also human beings. We’re not machines or robots; we can’t always fully control our actions. Also, conflicts and setbacks aren’t planned and can sometimes arise at the wrong time. Thus, this unpleasant situation has happened in every family.

The importance of making up in front of children

It’s not necessary to get angry and blame ourselves again and again for allowing our children to witness an argument. What is necessary is to make up in front of them and allow them to learn from that experience.

Most of the time we resolve conflicts with our partner when children are already asleep or playing in a different room. However, allowing them to be present in the reconciliation will benefit them in different ways.

First, they’ll be reassured by seeing that their two reference figures have made up. On the other hand, you’ll teach them by example that it’s normal for conflicts and disagreements to arise, but that these don’t imply a lack of love or end of the relationship. It shows them how to deal with disagreements and resolve conflicts with others.

But, above all, we allow them to witness important actions and values, such as the humility to apologize, the nobility to accept them, and the signs of affection that are characteristic of reconciliation. So, if arguments can’t be prevented in front of children, reconciling in front of them will always be an excellent alternative.

How Children Feel when Their Parents Argue
When their parents argue in front of their children, it makes them feel very sad. What's more, their behavior and the way they see things also changes. Read more »
Link copied!
Interesting Articles
Parenting
What Is Platonic Co-Parenting?