Historically, mathematics has struck fear into the hearts of many a student and graduate. However, when it's excessive or unfounded, it can be more serious. This condition is known as mathematical anxiety. 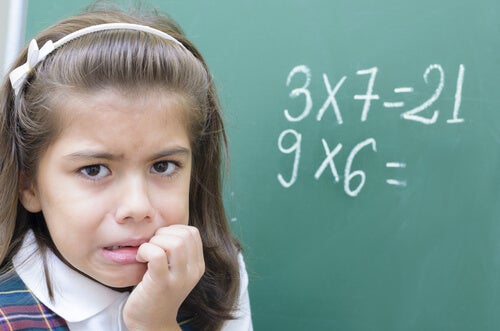 Mathematical anxiety in children is quite common. This condition is characterized by an intense feeling of pressure and nervousness when having to do math in public. Even if it’s simple multiplication, both children and adults can hardly bear it.

Interestingly, mathematical anxiety in both children and adults has nothing to do with intelligence. It can happen to children who have barely taken their first steps or to someone with a university degree.

Mathematical anxiety could be considered a phobia of numbers. Far from being a strange phenomenon, anyone who suffers from it needs to know that there is a wide range of research on this psychological condition.

And this fear doesn’t just rear its ugly head when doing sums on a blackboard. It can commonly happen in restaurants when having to divide up the bill.

What Are The Symptoms of Mathematical Anxiety?

You can tell that you suffer from this condition if you notice the following signs:

It has also been published that the brain releases cortisol, the stress hormone, when faced with mathematics. Curiously, it activates the same regions of the brain as when someone suffers an injury.

In children, mathematical anxiety can often more simply result in rejection. They simply won’t be prepared to do the task. They also won’t show any willingness to attempt the challenge and overcome it. And it can even affect children who normally perform very well in mathematics.

Causes of Mathematical Anxiety in Children

Firstly, it’s important to point out that this shouldn’t be confused with dyscalculia. Dyscalculia is related to mathematical learning difficulties, not an aversion to them.

It still hasn’t been determined exactly what causes mathematics to be so terrifying compared to other subjects. One thing that is sure is that children come to see it as a threat; something which they’ll have to face up to sooner or later.

For this reason, it activates the amygdala, a gland which activates when someone senses that they’re close to danger. Therefore, one explanation is the fear of failing a test.

Although this could be the case in other subjects, mathematics remains a peculiarity: there is no way to blur or cover up an answer to hide your lack of knowledge. There are only two options: right or wrong. There is also normally a clear route to find the answer.

This can also result in a lack of self-esteem. Children don’t know how to do the calculations well, so they stop believing in their own ability.

Other origins for this condition could be insecurities, or the teacher’s inability to teach. It could also be the result of a lack of parental support, whether because they suffer from it themselves or because they put too much pressure on their child.

“Math has a peculiarity: there is no way to blur or cover up an answer to hide your lack of knowledge.”

How to Address Your Child’s Mathematical Anxiety?

To overcome this condition, most people generally seek psychological therapy. With children, obviously, this falls on the parents. This is why it’s so important for parents to be involved in their child’s progress at school.

Aversion therapy is a very common method. This consists of facing up to the fear in order to learn how to overcome it.

It’s a method that you can even do at home. But how? You just need to sit down next to your children, be at their side, and tell them that you also have calculations that you need to do.

This way you can help them and then ask them to help you. This way you’ll both overcome this paralyzing condition.

For many people, it may not sound like anything important, or it could just seem like a minor problem. However, some studies claim that it’s an epidemic in some countries, including Spain. In any case, phobias are no fun for anyone.

So, if you see that your children have an unfounded aversion for numbers and counting, try to find out if they’re suffering from mathematical anxiety. If they are, don’t hesitate to see a professional to help try and resolve it as early as possible.