How Much Should Parents Give In to Their Children?

Since it's difficult to determine how to exercise authority, certain guidelines will help us know how much parents should give in to their children. 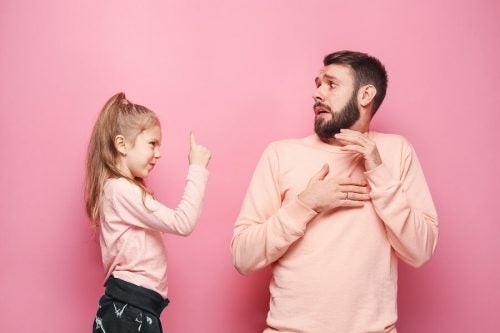 To what extent should parents give in to their children? This is a question that many parents are interested in for the welfare of their children.

Knowing the answer is important, because it helps them gain respect towards their parents’ authority.

To what degree should parents give in to young children?

Parents should let their children know that they are the ones who have authority. Every parent must provide support and protection to their children. However, this doesn’t mean they have to give in to all of their child’s wishes.

Despite this, parents must listen to their children’s views. Also take into account that, as they grow up, they need to make decisions that prepare them for independence in adulthood.

How much should parents give in to their teenagers?

Parents should give up control in certain areas when their children are teenagers. During this stage, parents must accept the changes, tastes and opinions of young people without losing their authority.

Close communication is important at this time, since young people still need the support of their parents to make certain decisions. Evidently, children need to differentiate themselves from their parents, especially during adolescence, in order to develop their own identity.

It should also be noted that parents shouldn’t give in to their children’s requests if they ignore the rules. The circumstances and characteristics of each particular request must be evaluated.

How much should parents give in with their young adult children?

At this age, parents should give up most of the control they have over their children’s decisions. However, young people are still inexperienced. That’s why parents should still provide guidance and wise advice.

On the other hand, parents should be ready to listen to the suggestions and opinions of their young adult children. In order for everyone to adapt to this new relationship, it’s important to continue maintaining a fluid and open communication.

Many parents make the serious mistake of giving in after saying no. A “no” must be non-negotiable, except in extreme circumstances.

“Children who don’t receive discipline from their parents grow up thinking that their parents don’t value or respect them. Meanwhile, authoritarianism is the opposite extreme of permissiveness.”

That’s why you must think carefully about your decision before saying no to your child. For example, if you tell him that he cannot watch television today, you shouldn’t give in even if he complains and begs.

Children need stable boundaries. For this reason, the father and mother’s reactions should always be in agreement, at least in front of the children.

In addition, moods shouldn’t influence the rules of the house. For example, if it’s wrong to scratch the wall today, it will also be wrong to do so tomorrow.

Authoritarianism is the opposite extreme of permissiveness. It means you make the child obey without knowing the reason why. You raise a submissive person without initiative or personality.

It’s also important to note that by not keeping promises or threats, your child learns that what you say is a lie. This leads him or her to disrespect your authority as a parent.

Suggestions for transmitting authority in a positive way

It’s essential to have clear objectives when raising your child and to clearly teach specific things. In other words, you should give specific instructions, but with love.

Another important aspect is to devote time to learning. Children need attention and support in order to follow your instructions.

A child’s learning process isn’t simple. Therefore, parents should value their efforts to do things well.

In order for your child to obey your authority, you must set an example between what you say and what you do.

In conclusion, we need to be clear about how much parents should give in with their children. In this way, it’s possible to educate our children responsibly so that they become successful and good people.