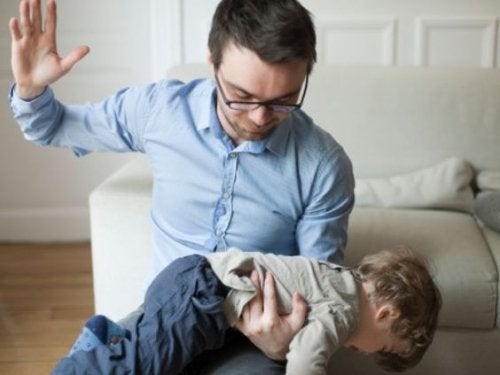 It is unfortunately common for parents to use physical punishment when raising their children. However, it’s important to consider the negative psychological effects it can cause.

The education one receives during infancy and adolescence from their parents or guardians can determine their future behavior. Therefore, punishment is considered the practice of imposing something unpleasant in an attempt to educate.

Keep in mind that education does not require strict punishment, especially when we know that it could harm the child.

Using physical punishment when raising children has been widely practiced around the world. It is frequently observed in every country, looks very similar and is always for the convenience of the parents.

There are also psychological punishments, which create less visible damage.

When parents physically and emotionally harm their children, they tend to believe they’re correcting their behavior, when in fact they’re doing the opposite.

The more punishments a child experiences, the more aggressive and violent that child can become; and the more likely he or she will react negatively in the future.

The Effects of Traditional Physical Punishment

Punishment has certain negative effects in a child’s life. For example, it can provoke depression, aggression and violence, among others.

Many parents believe that when done lightly, physical punishment is helpful in teaching children what “no” means. In order to get their children to behave properly, most parents use negative punishment.

Of course, physical punishment can reach levels of abuse. It tends to generate psychopathology and violent behaviors in children. The problematic effects produced by punishment include:

If the punishment is severe enough, it can cause tremendous fear in the child. Perhaps he wants to hide from the one who punished him.

In short, it destroys the child’s trust in his parent or guardian.

Punishments and the Development of Children’s Personalities

Parents usually use punishments because they don’t know any other way to correct their child’s behavior. In most cases it is an ideological imposition.

It is common for a parent to decide to discipline their child excessively in the face of inappropriate, spoiled or difficult behavior without considering the possible negative effects it can have on the child.

This type of punishment, whether mild or severe, hinders the development of the child’s personality. It also backfires, in that the little one becomes even more rebellious and suspicious.

Some punishments that have nothing to do with physical abuse can also affect the child, particularly when the child’s dignity is attacked. This tends to happen in schools, where the punished child can be the subject of cruel taunts.