Discover the Characteristics and Benefits of Mentalization

Awareness is key to the social development of children. With that in mind, we invite you to discover the characteristics and benefits of mentalization! 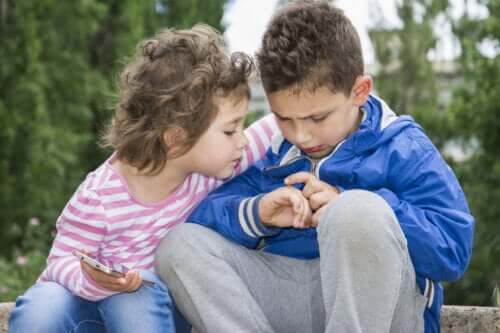 Have you ever wondered how human beings can “read” the minds of others? Well, this ability is known as mentalization and involves the development of interpersonal and intrapersonal intelligence. Do you want to know what the characteristics and the benefits of mentalization are? What’s it for? When do you acquire it? Then pay attention to the information we’ll share in the following article to discover the answers to these questions.

Before continuing, you should know that babies aren’t born with the ability to implement this mental ability. Rather, it gradually develops through the experience and relationships that children establish with others.

Mentalization, also known as reflective function, is a mental capacity. It allows you to imagine and understand your own mental states and those of others in order to perceive and interpret your own behaviors and actions, and those of others. In other words, it consists of attributing certain thoughts, feelings, desires, beliefs, needs, motivations, etc., to explain your own and other people’s behaviors.

So, this complex cognitive ability is fundamental to establishing satisfactory social and affective relationships… Relationships based on mutual help, communication, empathy, assertiveness and active listening.

“The ability to put oneself in another person’s place is one of the most important functions of intelligence. It shows the degree of maturity of the human being”.

What are the benefits of mentalization?

According to psychologists and psychoanalysts Angelina Graell Amat and Gustavo Lanza Castelli, some of the most relevant benefits of mentalization include:

The development of mentalization in childhood

Psychoanalyst Peter Fonagy is one of the creators of the term mentalization. According to him, this cognitive ability begins to appear in a very primitive way from the age of six months. And, little by little, children perfect it and it becomes more and more complex.

At the age of three, children begin to show certain empathic reactions. Then, throughout this age, they acquire the capacity to identify certain basic emotions in others. And, at the same time, they come to understand that these are different from those they themselves feel.

However, it’s not until the age of four or five that children are able to attribute and represent mental states in themselves and in others. So, experts consider this to be the time when they enter the stage of symbolism.

What role do parents play in the development of this capacity?

Finally, it’s important to note the role of parents and other main reference figures in the normal development of mentalization. In other words, it’s our responsibility to enhance their emotional intelligence from the first years of life. How? Very simple! From the time our children are born, we must act with empathy and show them that they can understand and react to their needs and desires.

Then, once children are older, it’s important to start talking about the thoughts and feelings they have. Give them names and label each one of them. In this way, children learn to reflect on their own feelings. And, later, in a natural way, they also acquire the ability to recognize and interpret the mental states of others.

Therefore, education at home and the way we relate to our children is key to the correct development of mentalization.

The Theory of the Mind: What Is It?
Before children develop their social abilities, they must acquire the Theory of the Mind. In today's article, we'll help you learn all about this concept. Read more »
Link copied!
Interesting Articles
Raising a child
10 Applications for Learning Languages