How to Boost Creativity in the Classroom

It’s important to boost creativity in the classroom, as encouraging creativity in students allows teachers to offer a more attractive and quality education. 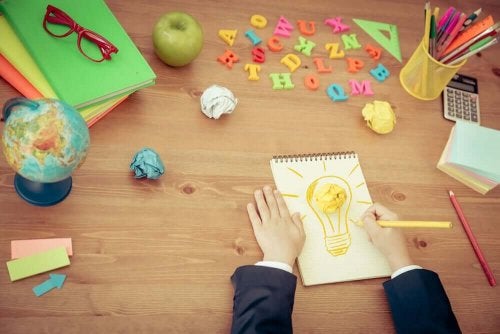 The concept of creative teaching has existed for a long time. When we talk about ways to boost creativity in the classroom, the figure of E. Paul Torrance definitely comes to mind. He was a psychologist who devoted his life to studying the advancement of creativity in education.

Torrance had to face strong opposition at the time, since there was a lot of controversy regarding the true nature of creativity. Creativity is considered an unlimited natural ability. He always fought for it to be considered a specific skill that could be built.

Nowadays, experts are addressing this issue in a different way. People are valuing creativity. Thus, it’s increasingly being considered an important resource for all students. In 2006, a talk by Sir Ken Robinson at TED (Technology, Entertainment, and Design) about this subject received more than five million views.

In this talk, he addressed the fact that our current school systems tend to suppress creativity. He recalled that our current model typically doesn’t leave much room for divergent thinking.

The practice of most creative education methods is taking place outside of traditional educational institutions, meaning outside schools. In addition, most textbooks are outdated in this regard.

The result is that the parents of students who are interested in creativity turn to other places to enhance this ability. It’s important to remember that it’s also possible to boost creativity in the classroom. Below, you’ll discover some of the best ways to do it.

Solutions to boost creativity in the classroom

Design a creative classroom by areas

It’s important to build classrooms that encourage creativity. For example, you can design boards to teach several possible ways to solve a particular problem.

Another good idea is to divide the classroom into creative spaces. For example, you can design a specific space to paint, an area for discussion groups, a table of proposal creation, and even a blackboard of questions.

Discussions are good ways to boost creativity in the classroom

In almost all classes, some students tend to ask unexpected questions that are both surprising and attract attention – questions that, sometimes, lead to discussions with their peers.

This isn’t a problem; it’s a treasure. You should only guide that discussion towards debate. If some of these questions lead to a topic you can talk about for a long time, you can write it down in the blackboard we mentioned above that’s reserved for questions.

Students can start thinking about the question and its possible answers, developing their imagination and boosting their creativity. If you return to those questions later on, you’ll validate students’ creative thinking.

You can work with E. Paul Torrance’s incubation model regarding student needs and guide them along this path. This is a model that consists of three distinct stages.

The theory of multiple intelligences ensures that many types of intelligences exist. You can try to develop all of them by creating specific stimuli and spaces for this.

Thus, you have to observe each student and identify which intelligence is more developed. Then, you’ll encourage them to boost all of them. It’s another way to boost creativity in the classroom.

To be creative, you need to use different parts of your brain. Thus, help students use their strengths to find new ways of addressing a new topic or solving a problem.

You have to remember that we’re all creative and teach students this fact. When we’re children, this creativity is at its peak, ready to develop. You just have to focus on its appearance and nurture it.

3 Ways to Boost Creativity with Technology
Since it is so important, you might wonder if there's anything you can do to boost creativity with technology. Today, we'll show you how to do it. Read more »
Link copied!
Interesting Articles
Raising a child
How to Explain the Water Cycle to Children